In 1924, Tim was the first baby delivered at the now-heritage-listed Kyneton hospital and has kept his close connection with the country Victorian town ever since. 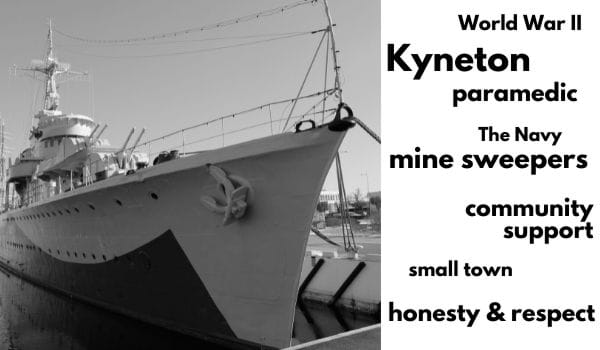 In 1924, Tim Collins was the first baby delivered at the now-heritage-listed Kyneton hospital. Decades later, his wife gave birth to the bluestone hospital’s first set of triplets.

They are fitting records for Tim, given his family’s strong connection with the country Victorian town where his parents owned a local newsagency and were active in the community.

‘During the worldwide financial depression from 1929 to approximately 1932 my mother was on the Mothers Club at the state school when a lot of the children had no breakfast because their parents didn't have any money to buy it. The Mothers’ Club ran a hot cocoa at 10 o'clock and my mother always told me, “You are not to get in the line-up. You are well fed”. But it didn't make any difference — I used to get on the end of the line. Like any kid, hot cocoa was too hard to knock back.’

Work life and the Navy

After finishing school, Tim got a job at the bank but, when war was declared, he joined the navy and was trained as a paramedic.

‘We did a rough course at the hospital in first aid, plus the initial drilling on the parade ground. Then we went up to Brisbane and the first thing they did was take us out for more rifle range practise because at that stage we were thinking the Japs were going to land.

‘I was four years in the Navy, with two years and three months at sea on Corvettes — mine sweepers. They were the nurse maids of the fleet.’

Tim was at sea in Choiseul Bay, off the Solomon Islands, when the news came through that the war was over. His fellow sailors, whose average age was 19, broke into the grog store on board so they could celebrate with warm beer.

‘It was a serious breach of discipline, but the skipper just let it go,’ he laughs.

Tim had started studying commerce during his downtime on the ship and when he was demobilised, he went to Melbourne University to continue the course. He never got to finish it.

‘My father unexpectedly dropped dead in 1947 and that left my mother on her own. So, overnight I went home and became a newsagent and I stayed there ever since. I didn't carry on the study, and I finished up buying the other two newsagencies (in Kyneton).’

He has no regrets about staying in the small town that rallied around him after an electrical fire destroyed his newsagency. The shire provided him with temporary premises and locals came in to make sure they paid accounts that had been lost to the flames.

‘That's the honesty and respect of the community. That's why I liked staying and living in Kyneton.’

Kyneton was also where he met and fell for a nurse called Patricia who became the hospital’s matron and the mother of his seven children.

‘We went together seven years before we decided to get hitched because I was Protestant and she was Catholic and, in those days, there was a lot of bitterness. But that's all gone. Finished. Thank goodness.’

Tim says marrying Patricia was the best decision he ever made.

‘She was the greatest partner I ever had. She helped me in everything I did. She made my life actually.’