Terry was 14 in 1950 when his family migrated to Australia from the UK and music has been a constant part of his life. 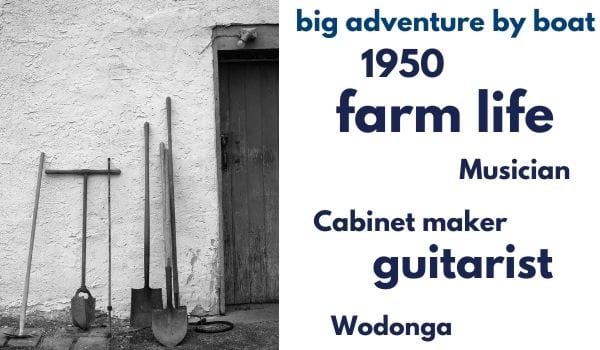 Terry Jepson was 14 in 1950 when his war-weary father decided to uproot the family from the UK and make a move to Australia.
‘It was a big adventure by boat,’ Terry says. ‘The trip was magic. I remember coming through the Mediterranean Sea and through the Suez Canal. We stopped at various ports and fellows came on board and did magic tricks. I can't remember exactly how long it took but it was a bloody long time.

‘I said to dad, “Why did you pick in Australia? I mean, we could've gone to any Commonwealth country, we could have gone to Canada, why Australia?” and he said, “It’s the furthest away from the war.”.’ Terry’s Uncle George, who had already settled in Australia, helped the family get set up in their new country. ‘He was instrumental in getting them a job on a farm, so we ended up milking bloody cows,’ Terry says. ‘I remember the first night, the place we stayed in had rats.’

Despite the inauspicious start, Terry says he had a happy childhood with his parents and sister on the farm. ‘Mum and dad would have a party at the drop of a hat. My sister used to teach the piano, so she played that, and I was on the guitar and it was happy times.’

Terry became a cabinet maker and had three children. He says whilst his first marriage did not work out, he got it right the second time round. Through it all, music has been a constant source of joy. ‘I used to play the guitar every Tuesday night in a place in Wodonga and that was good. I played anything and everything. People would yell out, “Do you know so and so, and so and so,” and I'd say, “Yeah, I met him”,’ he jokes.