Born in St Kilda in 1948 Suzanne's parents opened one of the first restaurants there. Her father, a Yugoslavian migrant, has been a huge influence on her life — inspiring her to become an English as a Second Language teacher and a lover of classical music. 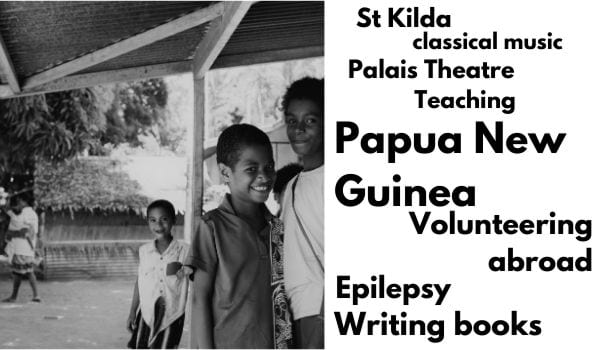 Suzanne Yanko worked as an English teacher in Papua New Guinea for six years and has worked in radio and written for Melbourne’s two metropolitan newspapers, but her proudest achievement is publishing three books on epilepsy that draw on her lived experience.

Suzanne was born in St Kilda in 1948 to parents who opened one of the first restaurants in that suburb. Her father, a Yugoslavian migrant, has been a huge influence on her life — inspiring her to become an English as a Second Language teacher and a lover of classical music.

‘My father would take me out of boarding school to see the opening nights of the opera at the Palais Theatre. I was a little thing in plaits listening to things that were very unsuitable for a five-year-old, but it was magic,’ Suzanne says.

After working as a secondary school teacher, in 1971, Suzanne signed up to do a stint for Australian Volunteers Abroad in Papua New Guinea. But, when she met and fell in love with fellow volunteer George, her initial 18-month commitment turned into six years. ‘I fell in love with him because he looked like a hippy but behind that was a man of intelligence and kindness.

We came back to Australia and set up our lives in St Kilda and we had two beautiful children.’ Suzanne continued teaching until she was diagnosed with epilepsy in 1990. ‘In about 1992, I wrote a book about the epilepsy experience.’ Suzanne then went on to write two more health guides on the condition to help sufferers and the medical profession. ‘George thought it wasn’t a very good thing for me to do when I was convalescing, but I did it. I wrote two books in a year and it is the thing I am most proud of.’

Suzanne fell in love with radio after writing and broadcasting English language classes in PNG and later hosted Classic FM in Australia. She also combined her passion for music and language as a music writer for both The Age and the Herald Sun. Suzanne continues to blog on her website, classicmelbourne.com.au as well as writing for her aged care facility’s newsletter and editing her church’s newsletter. Her advice for younger people is, ‘When you are overwhelmed with things, just make a start, somewhere, anywhere’.