Sheila was born in 1919, so has experienced a lot and has many memories. One of them is one of her sons who loved footy and was a gun player. 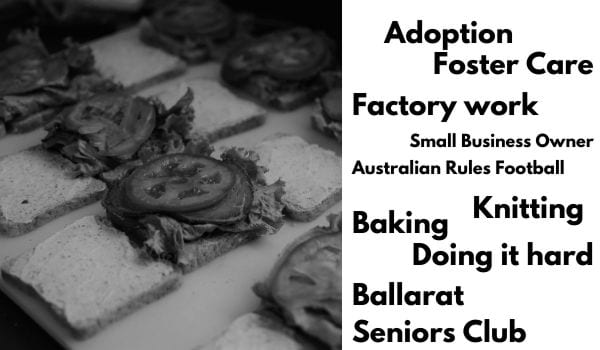 By any measure, Sheila Hunter had a tough start to life. Born in 1919, Sheila was relinquished as a baby by her mother.

‘We think her husband was killed in the war and that's why she couldn’t look after me,’ Sheila says.

When Sheila was three, a couple fostered her for a couple of years. 'She decided to adopt me and made the appointment at the solicitors. Three weeks before her appointment, she collapsed and passed away.’

Another family with a daughter the same age took Sheila in, but it was not a caring home. ‘When we finished primary school [their daughter] went to the Catholic Ladies College and I was sent to the factory to work.’

Sheila was 18 when she met her loving husband, Douglas, at a dance. ‘He'd come and take me out every Sunday for lunch and we seemed to get on well. Luckily, he had a little bit of money. I used to give my own pay in to the family.’

Once married, the couple ran a mixed grocery store, making lunches for factory workers. ‘It was seven days a week and it was pretty hard going. There was no sliced bread for sandwiches then, we could only get the flat loaf and cut it ourselves. ‘There was no air conditioning in those days. On a real hot day, you had to put your chocolates up on a shelf and hang wet towels or sheets or something down on them to keep them cool. It's hard to believe that now.’

The couple put some money away each week to buy a home in Aspendale, where they enjoyed living for 20 years in a house next to the football ground. Their middle son turned out to be a gun player. ‘He just loved football, even more than the beach. He ended up as Aspendale's best player.’ Douglas died in 1978, as he watched his son take a mark during the premiership match.

Sheila moved to Ballarat and enjoyed being an active member of the town’s Seniors Club Committee, knitting booties and baking cakes to sell to raise money for its Christmas lunch. ‘I think I did it hard right through, but I did well in the end,’ Sheila says.