Sandy McIntosh was watching the telly in her Glasgow home when she saw an advertisement for cheap flights to Australia. 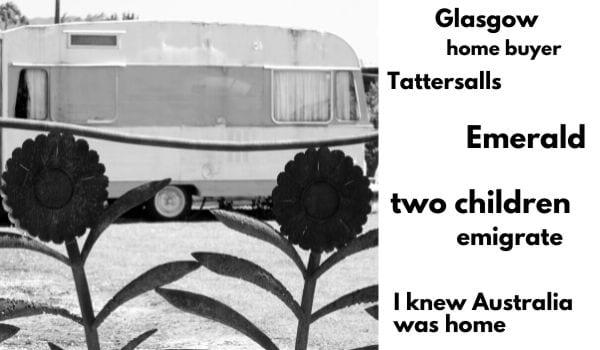 Sandy McIntosh was watching the telly in her Glasgow home when she saw an advertisement for cheap flights to Australia. With her brother already living in Australia, Sandy was sorely tempted.

It was a big adventure for Sandy, who was born in Scotland’s largest city in 1941. As a girl, Sandy lived in a ‘good’ part of Glasgow but her parents were not well off. Her dad was a slaughterman when there was work to be had, but it was inconsistent and badly paid.

Sandy left school at 15 and did a variety of jobs, including matching ticket numbers for the Pools lottery. She met Ken McIntosh at a dance when she was 17 and was immediately impressed by his trendy clothes and shoes. Three years later, the couple married.

‘Ken wasn’t good at dancing, but he liked the same music as I did and he dressed nicely,’ Sandy says. ‘I thought he was my type.’

Initially, the couple lived in the house that had belonged to Ken’s parents. ‘It was a very minimal place. It had a bedroom and a kitchen and outside toilet you shared with other people and I thought, “I don’t want to live here”, so I went skating around and found a flat and I bought it,’ Sandy says.

It was unusual for anyone, let alone a woman, to buy a home in Glasgow at that time but Sandy has always known her own mind and had found a supportive partner in Ken.

‘When I was complaining about the 60 steps up to the front door, Ken would stir me up by saying, “Well, you should have thought that before you bought it”.’

When Sandy and the kids returned from their Australian holiday, they raved so much about Australia that Ken, who had struggled to find ongoing work, suggested they emigrate. Sandy was 40 years old and their children, Colin and Shona, were high-school-aged when they made the permanent move to Emerald, on the outskirts of Melbourne.

After a short bout of panic when they first arrived, Sandy is delighted they made the courageous move.

‘The first morning we were staying in a caravan in (my brother’s) backyard and it was bucketing with rain and I just burst into tears,’ Sandy says. ‘I had no dog. I hadn’t earned any money yet and the sale of our house hadn’t come through so I had no home, and then the sun came out and that was it.’

Ken soon got a job as an electrician and Tattersalls snapped up Sandy, as they were just bringing in scratchy tickets, which she was familiar with from her work with the Pools in Glasgow. Sandy continued to work her way through the company ranks to become the second in charge of Tattersalls accredited representatives.

‘The very first time we went back to Scotland for a visit, as soon as we landed, I knew Australia was my home.’