Ruth’s family lost their farm during the Great Depression and she remembers they left in a wagon with eight horses and two or three of her mum's favourite cows — that was it. 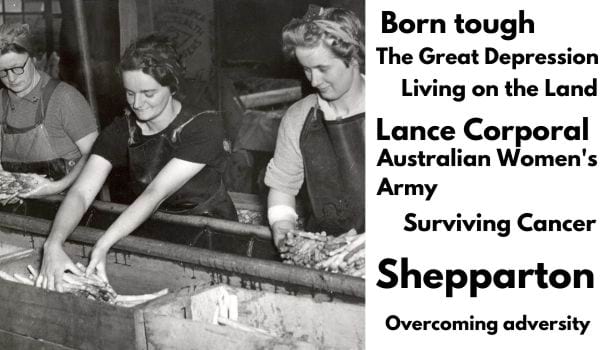 They breed them tough in Numurka, where Ruth Milkins was born in 1923 to a hard-working farming couple. ‘They had enough money to put together a deposit on some land and there was much excitement,’ Ruth says.

‘Everything went beautifully well until the Depression struck and the bank foreclosed, so the land was sold up and then we had to just rent somewhere. By this time there was seven kids. ‘We went off in a wagon with eight horses and two or three of my mum's favourite cows — that was it.’

Ruth left school at 14 and during World War II, served for three years in the Australian Women’s Army. She reached the rank of Lance Corporal and enjoyed the camaraderie of the services but remains traumatised by an incident when she was stationed at Fawkner Park.

A brush with death

‘I was going to go on duty that night at six o'clock. I got off the tram and the tent camp was in the middle of the park. I heard footsteps behind me, and I took no notice but then next thing I had hands over my eyes and my throat, and I was being strangled. Fortunately, at the camp gates there was a male officer and, because I screamed before I went down, he turned, and the attacker ran the opposite way.’ Her attacker was American GI Edward Joseph Leonski, who was known as the Brownout Strangler, Ruth says. Leonski was convicted of the murders of three women in Melbourne and was hanged at Pentridge Prison in 1942.

After the war, Ruth returned to Shepparton where she met her husband. ‘We met and married in about nine months and that was absolutely beautiful, except I didn't know he was an alcoholic. We had three years and three months together, and two daughters, but he got to the stage where it was either walk away with my girls or get carried out in a coffin.’

It was 31 years after her first wedding that Ruth had her happy ending, marrying Alan Milkins. “I survived ovarian cancer and we had 30 wonderful years together. We were both retired, our children were all grown up.’ Ruth says she’s had a fortunate life. ‘When things go wrong, remember to smile.’