Richard joined the army straight from school, making a career in the military after both of his parents had also served. 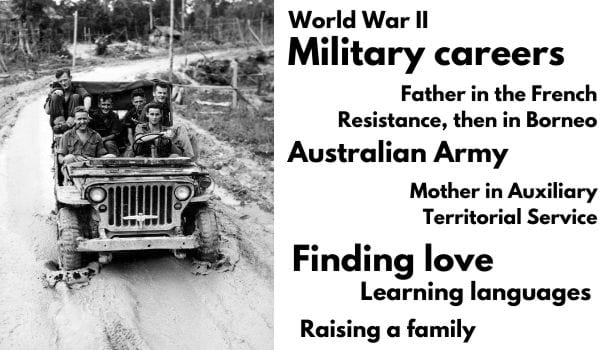 Born to an Australian mother and British father, Richard Wilson spent much of his early life travelling between the two countries before World War II saw him trapped in London for the duration. ‘My father actually reported for duty on the 3rd of September, the day the war started. He took me in his car from London to school, dropped me off and went on to his military camp,’ Richard says. ‘He spent some time in occupied France with Resistance people…When the war in Europe ended, the war against Japan was still going on, so he joined the Australian Army and was parachuted into Borneo and he spent the last part of the war paddling up and down rivers.’

In the meantime, Richard’s mother had joined the Auxiliary Territorial Service, and rose through its ranks to be the equivalent of a Captain. ‘She had about a hundred people to look after. I'm told that the Queen was in her section for some of the time but that was not publicised at all.’

A career in the military

Richard, now 94, joined the army straight from school. ‘I was commissioned about three days after the war ended, so I arrived too late to be very useful, but I wanted to make my career in the military,’ he says. Richard was ordered to learn Bulgarian and was sent to Paris to improve his language skills. ‘It's not all that logical, but government services are like that,’ he says. ‘I think someone said, “God, we've got to keep these people occupied what should we do? Make them learn Bulgarian, nobody's ever done that before…”.’

Whilst the Bulgarian didn’t prove too useful for his career, Richard’s time in France was not wasted, as it was there he met his beloved wife, Mary. When he resigned from the army, the couple moved to Australia where they raised their four children.