Born in Austria in 1936, Ralf recalls being woken in the middle of the night by his mother to seek shelter in a bunker during bombing raids. 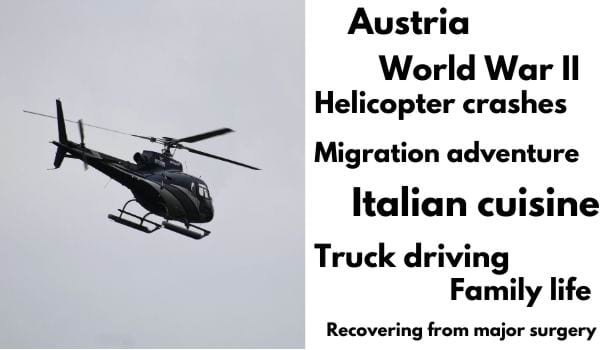 At 85, Ralf Heusserer has survived World War II, a helicopter crash, and a fall that saw him put into an induced coma. Born in Austria in 1936, Ralf recalls being woken in the middle of the night by his mother to seek shelter in a bunker during bombing raids. After the war, the family faced severe food shortages. ‘I remember going into the farmers’ paddocks in the middle of the night and digging up a few potatoes and the farmers shooting at us,’ he says.

Ralf migrated to Australia when he was 20, bringing his newly divorced mother with him. The ship journey to Australia was an adventure. ‘The Suez Canal was blocked so we had to come down around South Africa and that was pretty rugged. I wasn't sick, but there were 13 people to a table and when we were near South Africa there were only about three of us left. ‘It was an Italian ship, so there was a lot of pasta and I learned to drink wine. I'm still learning,’ he jokes. ‘Seeing the shoreline of Australia for the first time was a highlight,’ Ralf says.

Ralf worked at some iconic places in those early years, driving dump trucks for the Snowy Mountain Hydro Scheme and at the Rum Jungle Uranium Mine in the Northern Territory. It was in Melbourne that he met his wife, Beryl. They were together for 35 years and had three children. In 1990, Ralf was in a helicopter crash in the Northern Territory. ‘They didn't find us for a couple of days. We weren't seriously hurt. We were a bit knocked about, but nothing broken.’ However, he broke lots of bones when he fell from a ladder 15 years ago at the house he shared with Ruth, the woman he met after losing Beryl to cancer. He moved into aged care following the accident. ‘I was in intensive care in Box Hill Hospital with broken top and bottom jaw, broken ribs, punctured lungs, broken pelvis. I was four weeks in an induced coma. ‘Ruth’s now 93 years old and still drives from Melbourne to Wonthaggi every Sunday and back again to see me,’ Ralf says. ‘That's love and a lot of understanding.’