Neil heard a visiting Minister preach about the importance of using your talents in life. Inspired, Neil applied for a role as a missionary on a remote island in the South Pacific. 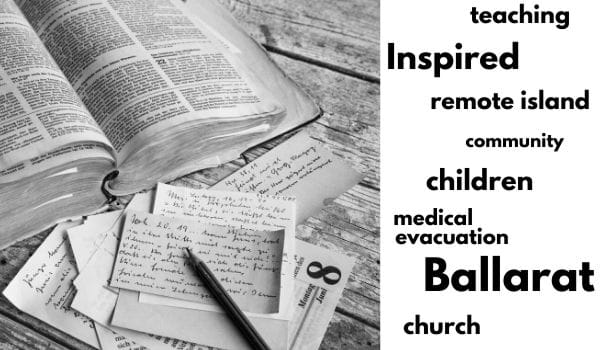 Neil Brisbane was teaching at a primary school in country Victoria when he heard a visiting Minister preach about the importance of using your talents in life. Inspired by the sermon, Neil applied for a role as a missionary on a remote island in the South Pacific.

‘Much to my surprise, I was selected. So, I had to go to Tanna, in the New Hebrides (now Vanuatu), and take over district schools on East Tanna and North East Santo and supervise village schools on those islands and other adjacent islands,’ Neil says.

It was both an exciting and brave move for a 24-year-old who had never been out of Victoria before and whose knowledge of the New Hebrides came from reading about John Paton, who is known as ‘the Missionary to the Cannibals’.

‘I was scared there many times when I shouldn't have been,’ Neil says.

Once Neil settled into island life, he enjoyed knowing he was making a difference in the lives of the children he was teaching, who spoke about 52 different languages plus dialects.

‘They had this system where a native teacher would teach the kids at a village school in their own language, then they’d have to pass an examination to go to the district school where they were taught in the universal languages of English and French.’ because on the island we were on, there were 52 languages – and you can’t teach in 52 languages,’ Neil says.

‘At that time about one in 10 kids from the village school got into a district school and about one in 10 of them got to the high school. Those kids could get great jobs in nursing, policing and teaching; even if they didn't pass very much, they were prized by the big companies. A few years after I left, I went back and I found some of my pupils holding important positions. I had one lad who wasn't very bright, but he was running private docks on Vila. Another girl was lecturing at the teachers’ college.’

Unfortunately, Neil’s young wife, Mary became ill and had to be medically evacuated to Australia. The couple endured an arduous trip back to Melbourne via New Zealand that included being confined in a padded cell on a boat from Santo to Vila.

After Mary recovered, the couple moved to Ballarat with their only child. Mary and Neil both continued to teach, and Neil also became a lay preacher and secretary of the Presbyterian church, with his patch ranging from Ballarat to the South Australian border.