In 1955, Molly travelled solo by ship to the UK when she was 23. She lived there for 20 years working as a school nurse and having a wonderful time. 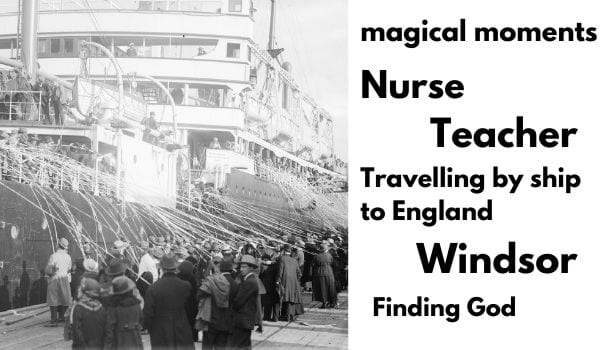 In 1955, a twenty-three-year-old Molly Richards had had quite enough of her back-breaking hospital job and leapt at the opportunity to travel solo by ship to the UK. ‘My sister was already in England working as a teacher and I thought, “Right I want to go to England. I want a different scene, I’ve had enough of nursing”,’ Molly says. ‘Nurses got pushed around unmercifully at that point, they just said jump and you jumped.’

A change in career

Molly was offered a job as a school nurse at a prep school run by the Jesuits in England’s North. ‘I got instruction in the faith and I decided I'd become a Catholic.’ After completing her 18-month contract, Molly returned to Australia, but found it hard to settle, particularly as her religious conversion caused a falling out with her mother. Once again, Molly boarded the ship to the UK, where she stayed in a bedsit in London and travelled through Scandinavia and ‘the Continent’.

‘I got a job at a prep school three miles out of Windsor and that was the best part of my working life,’ Molly says. ‘It was wonderful. The parents were well-established and extremely nice people. Living in Windsor, there was always something going on. We were considered to be neighbours of the [Windsor] Castle so we had special privileges.’ Those privileges included members’ tickets to the polo, where Molly saw Prince Phillip and Prince Charles play. All up, Molly spent 20 years in the UK. ‘I had many magical moments in England, I really loved it.’ Unfortunately, health issues resulting from a childhood accident has meant Molly has been dogged by pain her whole life and they led to her permanent return to Australia. ‘I do a lot of praying and got into meditation and that's very helpful,’ she says. Her advice to younger people: ‘If you can find God, you'll be much, much happier.’