Mavis and her husband Jim lived in Horsham for 69 years. Never one for overseas travel, Mavis has travelled extensively around Australia visiting her son during his 26 years in the armed forces 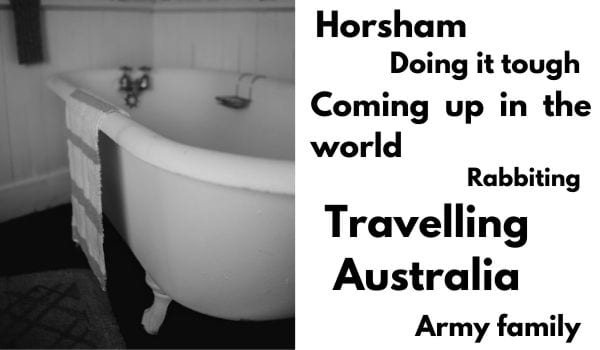 As a newly married couple in 1949, it took Mavis Wilde, and her husband Jim, 18 months to save enough to buy their first home in Horsham.

The ‘fixer upper’ that was to be Mavis’ home for the next 69 years had no power, no sewerage and no hot water when the couple first moved in with their one-month-old baby. ‘The house was built during the Depression and there was a kitchen, lounge and two bedrooms. Each room was off the other with no passage. There was no sink or cupboards in the kitchen. There wasn't any power points or electricity,’ says Mavis, now 96. ‘You went out the kitchen door and there was the bathroom and laundry with a copper and two cement wash troughs and a bath. When I was in the kitchen and I needed water, I had to go into the laundry.’

Mavis remembers thinking they were ‘really coming up in the world’ when they finally installed a porcelain bath. Jim was a laborer and Mavis stopped paid work after they married to raise their four children. ‘Not many married women did go to work in those days. My husband said, “I don't want you to work, people will think I can't keep you”.’ For extra food and money, Mavis and Jim would often go rabbiting on the weekends, catching well over one hundred bunnies at a time. ‘When I see the price of rabbits now in butchers’ shops and delicatessens and I think how much we used to get for them. Things have changed!’

While Mavis never had a hankering to go overseas, she’s certainly enjoyed travelling to every state in Australia, including multiple army bases during her son’s 26 years in the forces. ‘From when he was in primary school, all my son wanted to do was join the army. He was 17 and a half when he joined and he kept moving around and he'd say, “Mum I'm shifting if you want to come for a while”.’