‘Take notice of what people say to you. Don't carry on so much about yourself. Talk to your wife and never go to bed at night quarrelling…get a kiss and a cuddle, and you're ready for the rest of the night.’ 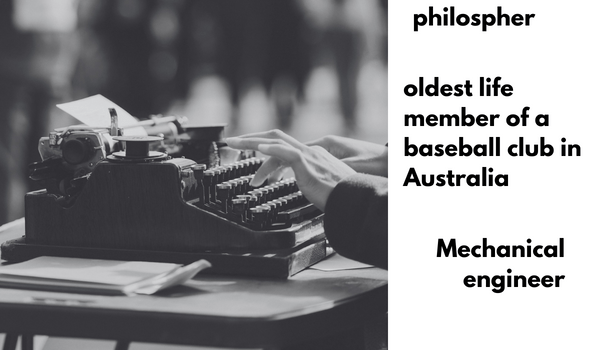 After 90 years and two happy marriages, Maurice Tobias is well qualified to pass on his secret to a marvellous life: ‘Take notice of what people say to you. Don't carry on so much about yourself. Talk to your wife and never go to bed at night quarrelling…get a kiss and a cuddle, and you're ready for the rest of the night.’

Maurice was born in Hawthorn in 1932 and left school at 17 to become an apprentice with the State Electricity Commission (SEC). He studied at Melbourne Tech, where he learned baseball. ‘I loved it and it just stuck with me. Now I am the oldest life member of a baseball club in Australia.’

Maurice worked for the SEC for almost 41 years, working as a mechanical engineer mainly at the head office and at the open-cut mine at the La Trobe Valley.

He married his first wife, Norma Jean, in 1955 after he successfully sought her father’s permission.

‘He said, “Boy, if you know you've got enough money to look after my daughter, yes, you can get married”. So, we did.’

The couple shared a love of ballroom dancing, which they taught in Melbourne, and had a son and a daughter who were adults with families of their own when Norma Jean died of cancer.

‘Fourteen months from when she was diagnosed, she passed away.’

Maurice remarried a couple of years later, in 1987, after meeting his current wife, Dianna, through a mutual friend at church.

‘A lot of people said that was very quick, but my late wife told me she didn't want me to go for the rest of my life single because that's just no good. That made it easier for me.’

Dianne was a widow, with four children of her own.

‘We've been living beautifully since then. The family are all together. We got six children, 13 grandchildren and eight great grandchildren. That's the combined family,’ Maurice says.

‘As soon as I retired, I spent a lot of time with the children, helping them do renovations in their houses and all that sort of thing, and I loved every minute.’

‘Our son Garry used to race super cars and when I finished work, he said, “I'd like you and mum to come along”, and we went all around the different tracks in Australia and mum used to clean the little stones out the treads on the tyres and I used to do any mechanical work on his car. He'd say, “Can you advance this spark? Can you do this? Can you do that?”, and away we’d go. It was marvellous. We did that for 14 years.’

Maurice says he is glad to still be around and enjoying life.

‘I’m proud of how the children have grown up and that they can come along and talk to me about all different things. Even if it's something like ice hockey where I’ve got no idea — but by the time you read about it, you can talk about it. I've never, never been one to say, “No, I can't talk about that”.’