On a Saturday night, after a hard week’s work on the farm, Mary and her husband John would pack up their young children and drive miles to entertain people at old time dances. 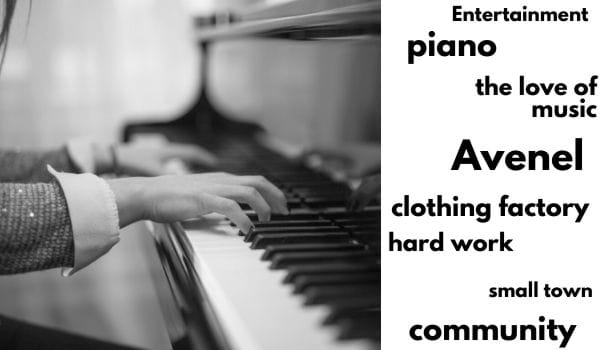 On a Saturday night, after a hard week’s work on the farm, Mary Vearing and her husband John would pack up their young children, and John’s drumkit, and drive miles to entertain people at old time dances.

Mary taught herself to play the piano by ear and John learned the drums so he could accompany her, and the couple would play all night for the pleasure of it, rather than for any payment..

‘I loved the people enjoying themselves. I'd start up one dance and I'd keep on going. They wouldn't want to stop,’ Mary says.

Mary also played at the local debutant balls, including the practise sessions leading up to the young people’s big night.

‘It was funny how when they came to practise, the boys didn’t know which foot was their right one and which was the left one. Half the time they'd come along in runners instead of shoes,’ Mary says.

Her own children recall taking to the dance floor for their deb’ with their mum beaming at them from the stage.

Mary was born in 1935 and lived with her three siblings and parents in the tiny town of Avenel, 12 miles north of Seymour.

‘I left school when I was about 13 and a half because my mother and father were not well,’ Mary says.

She got a job at a clothing factory in Avenel, making raincoats, and she’d ride her bike to work and home again each day.

‘It was a lot of gluing down of seams. I was there for three or four years and then I went to a farmhouse out of Avenel, and I cooked and did housework out there. Then I worked at the grocery shop and that was about my childhood. I was married when I was 22. I married a local; John lived in Avenel. He was one of nine and we just got together.

The couple had five children, with the first three all born within three years. Mary now has 16 grandchildren and 17 great grandchildren.

‘We were married 54 years. John passed away ten years ago. He worked hard. He cut wood, he worked in the shearing sheds and then, after we were married, he was working on his sister and brother-in-law's farm. That was 10 miles out of Avenel. They built a little cottage for us, and we lived out there for nine years. Then we shifted back into Avenel, and he worked at Puckapunyal for 25 years.’

The 1971 Census listed Avenel’s population as only 351 but Mary says she never considered leaving the tiny town that she has always called home.

‘That was our hometown. Everybody knows everybody at Avenel. That was where all our friends were. It's a very close town.

‘I was treasurer and secretary of Avenel Senior Citizens for 15 years and I did the booking clerk and treasurer's job at the Memorial Hall for 30 years. Nobody wanted to do it. Once you get those jobs, you can't get rid of them,’ she laughs.