As a young woman in the 1950s, Marie Golding’s decision to become a teacher was not a hard one to make. ‘Back then girls could go into teaching or nursing,’ Marie says. 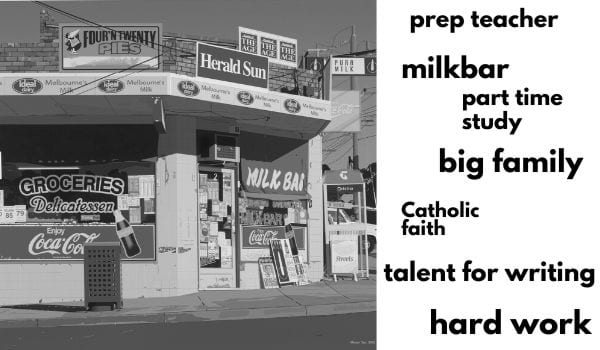 As a young woman in the 1950s, Marie Golding’s decision to become a teacher was not a hard one to make. ‘Back then girls could go into teaching or nursing,’ Marie says.

‘When we started, they gave all the girls a piece of paper to sign where we agreed that we wouldn't get pregnant for three years after graduating,’ Marie says.

‘They didn’t give the boys anything to sign,’ she notes wrly. ‘Imagine them doing that nowadays.’

Marie had no option but to accept the contract, however, as fate would have it, she discovered she was pregnant just as she was beginning her first position out of university.

‘I’d met Jim at a dance at Heidelberg Town Hall — that was our entertainment at the end of the week,’ Marie says.

The couple married and they went on to have another seven children over the course of their 55-year marriage. ‘We never learned the recipe to not,’ she laughs.

Both Marie and Jim had to work long hours to support their growing family.

‘Jim's parents ran a milkbar and he decided he wanted to give it a go. So that's what we did. We had eight milkbars over the years,’ Marie says. ‘It was hard work. Early mornings, late nights, seven days a week.’

A couple of decades after forcing Marie to resign, the Department of Education gave her a call out of the blue to ask if she’d be interested in working at a school in Frankston.

‘It was during the teacher shortage,’ Marie says.

There was no apology for the way she had been treated and Marie was initially told she needed to go back to university to upgrade her qualifications, but Marie agreed and began studying part-time, in addition to working part-time as a teacher and helping in the milkbar. Six months later, the department informed her they had been mistaken and her qualifications were adequate but, by then, Marie was committed and went on to complete another five years of vocational training.

‘I was a prep teacher. I loved it,’ Marie says.

‘It’s a lovely age; there wasn’t any kindergarten or after-school care back then, so they were like babies when they started and by the end of the year they were little adults.’

At 91, Marie has been widowed for 15 years and has also buried four of her children, including her second child, Christine, who died of meningococcal disease when she was only two years old.

‘They couldn’t do anything about it back then,’ Marie says.

Marie’s strong Catholic faith has ensured she has taken the losses in her stride. ‘It’s God’s will,’ she says.

Now a resident at Berengarra aged care facility, Marie enjoys the planned activities as well as knitting, puzzles, and her more recently discovered talent for writing. She is a regular contributor to the aged care facility’s newsletter.