When Margaret was young, she wanted to make up for her lack of experience with children by training as a mothercraft nurse, however World War II disrupted her plans. 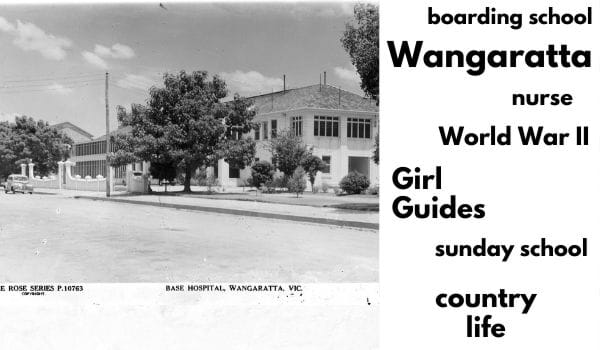 When Margaret Smith was young, she wanted to make up for her lack of experience with children by training as a mothercraft nurse, however World War II disrupted her plans and she ended up learning about them firsthand — by having four of her own.

Born in 1926, Margaret completed her merit certificate in Wangaratta but back then students had to move away from home to finish high school.

‘It was 1942 when I had to go to boarding school in Melbourne to do Form Five and that was a bad year for Australia. When the war came, they bombed Darwin and the Broome coast and it was very unsettling,’ Margaret says.

Whilst Margaret had booked to train as a mothercraft nurse at the Methodist Babies Home in South Yarra, which had been founded in 1929 to care for babies awaiting adoption, uncertainty about the war prompted her to return to Wangaratta.

‘I was helping mum, who had high blood pressure and had a bad time with my younger sister,’ Margaret says.

Margaret was soon required to register for war service and began nurse training at Wangaratta Base Hospital until her mother’s worsening health, and her own repeated bouts of tonsilitis, forced her to become her mum’s carer.

It was then that Margaret met a handsome young man, Gordon Smith, who was in charge of maintenance at the Bright Pine Mill.

‘He started off just as a worker and when a young engineer came up to help get the big mill going, he wanted an assistant, so he chose the boy that was doing jobs instead of leaning on a broom,’ Margaret says.

Gordon also harbored a more personal ambition; he wanted to raise a family in the country.

‘I didn't know much about children, but I had four of my own and when they were trying to set up Guides in Bright, I was about one of the first to go to the meeting at the local association because I'd had three years of Guides when I was 11, and thought it was a wonderful organisation. So, I volunteered as an assistant to Brown Owl. I was Tawny Owl for five or six years.

‘I also did Sunday School teaching for 14 or 15 years because we didn't have a Sunday School at the Presbyterian church. At that stage I had two little kiddies and I said to the head elder, “I wish we had a Sunday School”, and he said, “Are you interested?”.

‘I loved Sunday school as a child, we went every Sunday.’

Gordon passed away in 1988, when Margaret was only 62, but she has no regrets about the life they built together and still enjoys frequent visits from her children, and grandchildren.

‘They all loved country life, my four. There were the pine plantations to play in and places to ride your bike. Bright was a wonderful, quiet little village when we were young and when the kiddies were young.’