Margaret grew up in Numurkah and moved to Melbourne to further her music studies as a talented pianist. 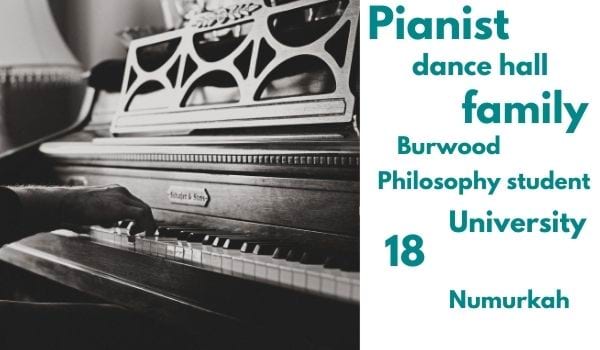 Margaret Burke was a talented pianist, moving from her country town of Numurkah to Melbourne at age 18 to further her music studies, when she attended a dance that would change her life. ‘I met Tom in the barn dance, where you swap partners. Of course, he asked me, “What your name and where you come from?” and all that. He knew someone that I knew and apparently he went over to his friend and said, “I've just met the girl I'm going to marry”.

‘I was supposed to be practising my music and doing my exams, so I put a stop to this romance. I said, “I can't go out anymore. I have to be practising my piano”, I don't think he was very impressed. Anyway, after I finished exams we somehow got together again.’

Margaret was 20 when they married.

‘We built a house in Burwood. It was very hard, because it was after the war and you couldn't get bricks and we couldn't put a roof on the house. When we moved in, we couldn't get the electricity connected. There were so many things, but we didn't care, we were blissfully happy.’ Within a year of their marriage, Margaret had the first of their six children. When they had grown, Margaret returned to university, studying philosophy, as a mature age student. ‘I did that for 12 months and I was offered honors the next year, but then I had a nasty car accident so I didn't ever go back, but I showed I could do it — I suppose I showed myself I could do it.’

Margaret is now enjoying living at Cabrini Residential Aged Care. ‘The staff are all amazing. Aged care nursing is very special and I'd like to fly the flag for all these places.’