Lorraine says Patchewollock is, ‘in the Mallee where the crows fly backwards to keep the sand out of their eyes’. 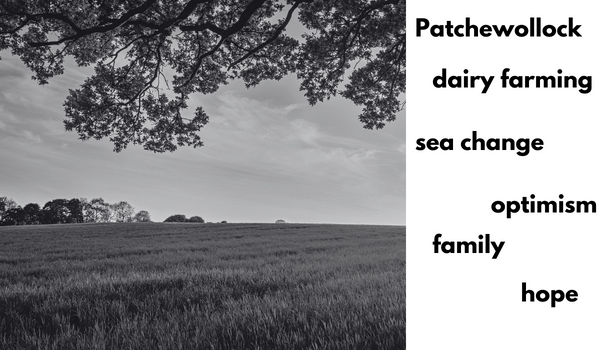 Not many people will have heard of the small town where Lorraine Cottrell was born in 1943. Lorraine says Patchewollock is, 'in the Mallee where the crows fly backwards to keep the sand out of their eyes'.

Lorraine grew up on a grazing property with her five brothers. 'I had two older and three younger. Look, they were fine but we all used to fight at the meal table - if you weren't quick, you got nothing because they’d grab all the food.'

When her dad went into dairy farming, he put all the children to work.

'Everybody from the oldest to the youngest, we all took it in turns to milk the cows morning and night before we went to school, until you left home and got a job.'

At 21, Lorraine decided to fulfil her dream of living next to the sea.
'I needed to leave home to be allowed to grow up because, being the only girl, when I went out in the week, dad was having a heart attack,' she laughs.

She’d worked as a telephonist in Kyabram since leaving school in Year 10, so applied for a job with the exchange in Dromana.

'I was senior to everybody else in experience, so they put me in charge. At Christmas time they put on an extra 60 staff, so we probably had about 90. I thought, "Heavens above, what have I done?",' she laughs.

Her parents weren’t very happy about her move but would come and visit her at her little flat near the beach.

'I used to laugh. They’d come down and dad used to say, "Oh, your mother was driving me mad. She wanted to see you", and mum said, "It was bloody him that wanted to come!".'

'They were wonderful. They used to do everything together. They used to go arm in arm to get the cows in. In those days, you had a toilet out the back, and dad used to put his hat on and give mum a kiss and I’d say to mum, "Where's he going?" and she’d say, "He’s only just going to the shitter",' Lorraine laughs.

Lorraine worked in Dromana for a decade until a near fatal car accident led her to return to the farm to recuperate.
'I've had back trouble ever since. I've had three back operations but, God bless me, they said I'd never walk again, but I bloody did. It took me a long time. I was in the rehabilitation unit for three months, but I've been blessed. I walked again and got married and I had two boys.'

Unfortunately, Lorraine had only been married to Peter, the brother of a former work colleague, for 13 years when he died of cancer, leaving her with her two primary school aged sons.

'If you talk to most people, they've all had ups and downs or traumas or something, but my philosophy is that that's done and dusted. You can't dwell, because if you dwell, you're going nowhere. There's still life to live and you’ve got to move on because better things could happen in the future.'