Linda had a thoroughly international childhood. Born in India, she was only a baby when the family moved to East Africa, where she grew up with Italian as her first language. 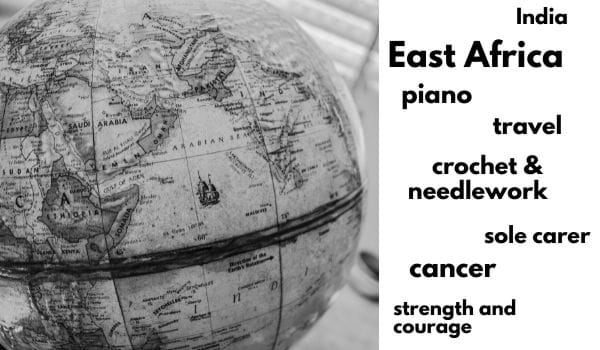 Linda Cordell had a thoroughly international childhood. Born in Calcutta, India, in 1949 to a Welsh father and German mother, Linda was only a baby when the family moved to East Africa, where she grew up with Italian as her first language.

‘We moved to Asmara, the capital of Eritrea,’ Linda says.

Whilst the British had taken Eritrea from Mussolini’s Italy as part of the spoils of war, Asmara was still rich in Italian culture and school children were taught in Italian.

Linda’s father was an accountant and the family travelled around Africa as he was posted to different countries. She was eight when they settled in the England for a few years, where she was able to complete most of her schooling, including studying piano at the London School of Music.

‘From England, we travelled all Europe and then went back to India, to Calcutta, and I grew up in the shadow of the Taj Mahal. I had a beautiful childhood. All my life has been interesting,’ Linda says.

From India to Australia

Linda worked at the British High Commission as a secretary until India achieved independence from British rule in 1947.

‘All the British were leaving and Australia opened its doors to them,’ Linda says. ‘I was 21 when I came to Australia with my mother, my father passed away in India.’

Linda got a job with a health insurer in Melbourne and her mother worked as a nurse and secretary.

‘I gave up music because I didn't have a piano when I came to Australia. That was a shame, but I learned crochet, tapestry, needlework and knitting. I taught myself and I used to make clothes for other people.

‘I had a good life. I had a good parents, they gave me a good education and brought me up.’

Linda returned the favour when her mother became a double amputee as a brutal complication of her diabetes. ‘I looked after her for five years. I was her sole carer.

‘I've had my challenges in life, a lot of medical challenges, cancer, diabetes, everything you can think of and I’m still going strong. Those who don't know me would be surprised at everything I have been through. I fought and fought with strength and courage. No matter what, I fought it and came through.’