Les fought in the jungles of Papua New Guinea in World War 2 and returned to run a dairy farm with his wife Pam. 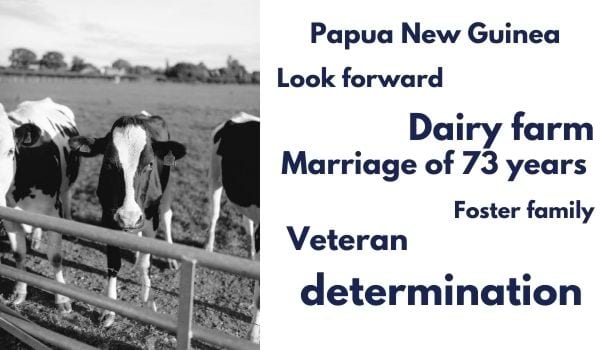 At 99 years old, Les Trigg has survived losing both parents as a child, fighting in the jungles of Papua New Guinea, and a close shave with scrub typhus. Despite that, he reflects on his life as a happy one, citing his luck in being fostered to a good family, his marriage of 73 years to Pam, his two children, and finally overcoming the post-traumatic stress disorder that dogged him for decades.

‘When I was a baby of 15 months old, I lost my mother. She was an English war bride from the first world war. My dad was working on the Great Ocean Road so [my sister] June and I were put in a family home,’ Les says. ‘My dad remarried when I was about five years of age and he brought us to live with them in a little property for four years. Then dad went into Melbourne Hospital and he never came home - he passed on with war injuries.’ Fortunately, both June and Les were separately fostered by nice families in the local district when in their early teens. ‘They were terrific to me,’ Les says.

At 19, Les was called up to fight in WWII and his experiences fighting in the jungles of Papua New Guinea left him struggling with Post Traumatic Stress Disorder. ‘Losing a mate lying alongside you, you never get out of your system,’ Les says. ‘I’d get nightmares and be shaking and shuddering and Pam used to wake me up. Then you'd go OK for sometimes 10 or 20 years, then goodness gracious all of a sudden it would come back and you couldn't get those images out of your mind.’

The couple bought a dairy farm where they raised their two children and in 1994, Les returned to PNG to visit the graves of his fallen comrades to put those ghosts to rest. ‘Thinking of having them buried in the jungles played on our minds when we [veterans] got together and there’d be more tears than you can get in a rainbow,’ Les says. ‘When I saw the cemetery where they were, that's when my life changed…it’s a great relief to know where they are.’ Les is now enjoying life in the aged care facility he shares with Pam. His secret to a long life: ‘Determination and don’t look for anything negative. Look forward. Never look behind you.’