Leonie and her husband Ray ran the Poachers Paradise Hotel in Rutherglen and later the town’s taxi service, often driving veterans to Melbourne for medical appointments. 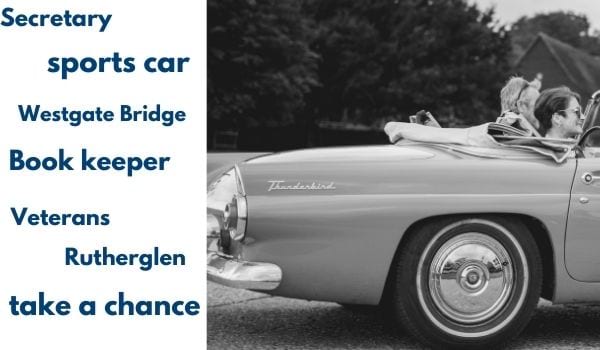 Somewhere there is a photo of a young Leonie Featonby sitting in the back of a sportscar with her colleagues, wind in her hair as she celebrates driving across the newly completed Westgate Bridge.

Leonie, now 78, had been working as a secretary for the consortium that rebuilt the bridge after its collapse in 1970, which killed 35 construction workers.

‘I was one of the first people over the bridge. One of the staff had an MG so I went across in it with a couple of the girls from the office,’ Leonie says.

With the bridge complete, Leonie began her own bookkeeping business before she met and married a handsome young police officer, Ray Featonby. Ray was separated with two boys that Leonie was happy to adopt as her own.

‘We bought a couple of old houses in Footscray and lived in one whilst we renovated the other one. We were saving up for Ray's five-year plan of buying a pub,’ Leonie says.

The couple bought the Poachers Paradise Hotel in Rutherglen and, with no training or experience, Leonie turned her hand at running the restaurant whilst Ray looked after the front of house.
‘We just got on with it,’ Leonie says. ‘I had really good staff and I'm a bit of an organiser, so it wasn't that hard. We had quite a bit of fun.’
The couple were caretakers for the old Rutherglen convent for a time before their next big change, becoming partners in a local taxi business.

‘My favourite thing was driving veterans down to Melbourne for medical appointments. They were just such lovely old people and it was great.’

Taking a chance on things

Whilst Leonie still worked as a bookkeeper up to the age of 71, she was also involved in volunteer activities for the Red Cross and Arts Rutherglen, where she helped set up a local sculpture walk and run events.

'I've done a good job over the years, but I've also had a lot of fun,’ Leonie says. ‘I think the main thing is that you have to take a chance on things. You've got to put yourself out there and just have a go.’