Ken migrated to Australia with his wife when he was 77, following on the footsteps of their two daughters. 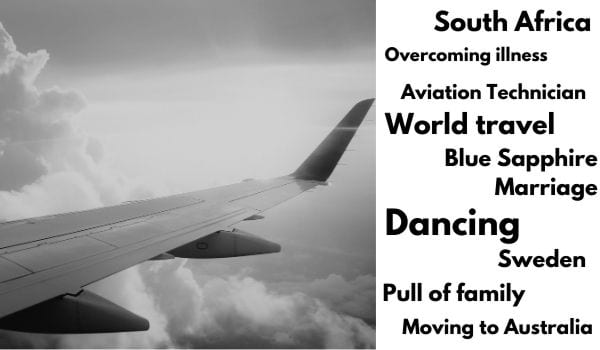 At 90 years old, Ken Weeks still marvels at how he almost didn’t make it past his 18th birthday. ‘I had a perforated ulcer and peritonitis, and I was at death’s door. Penicillin hadn’t been on the market for very long, but penicillin and prayer saved my life and here I am at 90, still going strong.’ Ken was born in South Africa, joining South African Airways as an apprentice aviation technician straight out of school.

He was in his early 20s when he met his wife, Shirley. ‘We met at the local bowling club dancing classes. I think it was a Monday night. It cost half a crown to go in and they'd have a Paul Jones dance, where the girls dance around one way and the boys go around the other and, when the music stops, whoever's in front of you, you dance with them. That's when I first met Shirley and it developed from there. Sixty-five years later we are still together.’ The couple had two daughters, Valerie and Jennifer and after many years working for the airways, Ken took a chance on a sales role for an electronics company based in Sweden, living in Europe for several months. ‘A change is as good as a holiday, so I decided to try something else,’ he says.

Ken returned to South Africa and the aviation industry, where he stayed until retirement, enjoying both the work and the bonus of the occasional free flight to Australia that enabled him and Shirley to visit their daughters, who had both migrated here. In 2007, the couple decided they should also call Australia home. ‘Moving to Australia was a big decision. I was 77 when we came here, and it was a big move. We had to leave all our friends, but I don't regret one little bit coming here. I'm very happy here. It was the best thing we ever did.’