Born in 1931, John worked overseas including in Singapore, South Africa, Sweden, China and Vietnam, and is now close to finishing his degree in medieval history 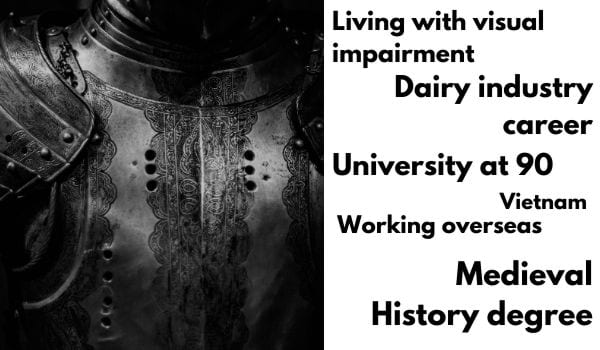 Technology has finally made it possible for John Wilson, who was born in 1931, to achieve his goal of completing a university degree. John suffered from heavy metal poisoning from a ‘pink powder’ that his mother used to give him when he was young. The powder, which was commonly used at the time to combat teething issues, contained mercury. As a result, he has a visual impairment. As a child at school, being unable to do his schoolwork led to him ‘getting the cuts’ from teachers who thought he was naughty rather than struggling to see and read. Not that his learning difficulties appear to have been much of an impediment to his career.

John became an expert in the production of dairy and other food products and drinkers of soy milk have him to thank for improvements in the taste of the dairy milk alternative. John’s work frequently saw him living overseas, including in Singapore, South Africa, Sweden, China and Vietnam. ‘I was asked to go to Vietnam to help set up a pear processing factory,’ John says. ‘I asked them to show me the pear trees and they were just sticks. When the communist government asked people to do something, they just did it, so they’d just planted all these cuttings but in a cyclone-prone country they would never have survived.’ John suggested they build a much smaller processing factory… John married a woman he had met through the church, but the couple separated when their daughter and son were young.

Now a resident of Mercy Place, John is close to finishing a degree in medieval history. ‘I’m doing it now because I can,’ he says. Advances in technology enable John to listen to, rather than read, the course material and he can work at his own pace. ‘I always wanted to go to university,’ he says. ‘Now I can.’