Ivan started work as a carpenter at age 15 and loved it so much he was still sanding floors at 90. 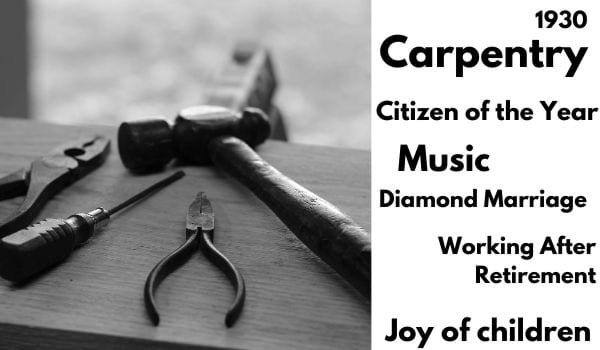 Ivan Streader started work as a carpenter at age 15 and loved it so much he was still sanding floors at 90.

Born in Boort in 1930, Ivan worked with his father and brothers in the building trade, making his start rebuilding sheds and other infrastructure destroyed by a fire season that was so destructive it led to the formation of the Country Fire Authority. ‘I came out of semi-retirement at 74 years old when we had a working bee down at the Memorial Hall. The ceilings are just on 14 foot high and the sheets in the ceiling — there are 90 of them — were loose and almost hanging down ready to fall on the floor.’ Ivan got up on the ladder and fixed the lot. ‘I never worried about being on a ladder. The only time that I was a little bit on edge was there used to be great big grandstand at the show grounds and one night there was a terrific storm blowing and a section of the roof, which was a 22 foot up, was lifting up and down. They were worried it’d take off. ‘My father said, “Don't stay up there any longer than you have to”. I got up there and said, “We won't”.’

Ivan first met his wife Patsy at a social at the Church of Christ in Harcourt when he was a teen, but it was when he was in his early 20s that love bloomed. The couple recently celebrated their 64th wedding anniversary. ‘My happiest memory is the birth of our first child, Russell. I recall the words of my own mother, “The absolute wonder of birth and nature”,’ Ivan says.

Giving back to the community

Community service has been important to Ivan, and he had the honour of being the first person to receive a Citizen of the Year award from the Boort District for his contribution to scouts and other groups. For many years, Ivan and his sister have run a musical afternoon for Boort District Health’s aged care facility. Now a resident himself, he’s continuing the tradition. ‘I’m strong on service to others,’ Ivan says. ‘We only go through the world once and if we've done a little bit, at least we've started to achieve something.’