As the oldest girl of a farming family with ten children, Irene Macwhirter was in charge of her siblings when her mother was in hospital having babies. 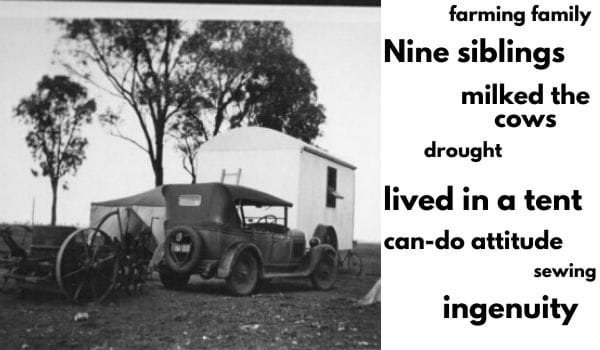 As the oldest girl of a farming family with ten children, Irene Macwhirter was in charge of her siblings when her mother was in hospital having babies. ‘It took me two days to do the washing each week. You had to carry the water in and then carry it out again,’ she says.

And that was on top of her usual chores, which included milking the cows twice a day.

Drought on the farm

Irene was born in 1929 at a small town called Barellan in New South Wales. It was tough times for the family as they battled drought during the Depression.

‘We were on a very, very small farm. When they first broke the land up for the farmers, they made all the farms too small, and the farmers couldn't get a living off a couple of paddocks. So, we stuck it out for quite a while and then dad had to put a share farmer on because he owed the bank money and we had to leave the farm and go and work at a big station near Griffith.’

After two-and-a-half years, the family was finally able to return to Barellan and lived in a tent (pictured) beside a cabin on their farm for a few weeks then moved to a farm owned by Irene’s grandparents, where they camped on the old tennis court. Irene was finally able to start school at age eight.

‘I went to school until I was 14 and that was all. We didn't have a choice because there were no high schools anywhere near us. If you wanted to go to high school, it was a boarding school and you had to go to Hay or Sydney, and we were needed at home.

‘If mum had to go to hospital, I was the one that had to look after things at home.’

Irene swapped milking cows for working in a grocery store in Millgrove after she married the store owner’s son Ron, and the couple soon had two sons of their own. But whilst she may have left the farming life, Irene hung on to her family’s can-do attitude.

‘My son (Philip) made a sailing boat at high school and when he finished it, he had to have sails and a spinnaker for it, so who did it? Mum. You just did it because you were there, and it had to be done.’

Her husband and Philip were both car mad and Irene was roped in to help.

‘Every car they bought was secondhand and they’d strip it down and put it back together again. Oh, there were car bits everywhere! I did the sewing on the upholstery on two motor vehicles, and I've laid underneath them and held the sumps up for my husband to screw it back in.

‘When Philip was about 16, he had a Morgan motor car, a convertible, and I had to put a roof on it. There was no pattern. It was just a wire frame. So, I did that. He has still got that car by the way, and he's now 65.’