Born in Glasgow in 1934, Helen met an Australian merchant seaman there and they married and came to Australia in 1959. Max was a character and they had a good life together. 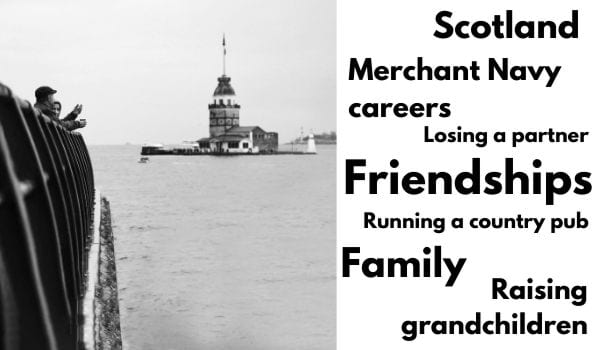 In the Glasgow of Helen Ward’s youth, everyone was Scottish, and nobody travelled anywhere much, so dating an Australian was a real novelty.

Helen was born in 1934, the youngest of three siblings. It was one of Helen’s friends, who had a boyfriend in the Merchant Navy, who introduced her to Maxwell Ward. Max had been born in Geelong, but his troubled relationship with his parents led him to join the British Merchant Navy at age 16. ‘My friend said to me that there was an Australian on the same ship as her boyfriend and would I write to him because he was lonely.’

Helen had been writing to Max for a year when he visited her while she was holidaying on the Isle of Man, off the UK coast.‘In them days nobody travelled and so if you went to the Isle of Man for your holidays, you were big time, you know, you were doing very well. ‘When I got there, Max had left a phone message that he would ring that night and, in them days, nobody had a phone so that was a big thing again.’

The couple married in Glasgow and moved to Australia in 1959. ‘My husband died when he was 55. I was 49. Your whole life's different, isn't it? My son was 23 and in the Merchant Navy and my daughter was 27. We were all shocked. I found out that on the day my husband died he had gone to Myer where I worked and spoke to the manager to rearrange my holidays. He was booking flights for us to go on holiday to the UK as a surprise for me. My 50th birthday was near and he wanted me to go home and see my father.

My husband was a character, there was never a dull moment. When he had a falling out with his family, he’d say, “I don't really need them. I've got enough friends to fill a cathedral”,’ Helen says. When Max died, they held the funeral at St Mary’s – the biggest Catholic church in Geelong. ‘It's like a cathedral,’ Helen says, “The priest told me after that it holds 2,000 and it was full, and they were standing outside.’ Helen helped her son run a country pub for a couple of years as well as helping bring up her grandson. ‘I don't really have any complaints about my life because there's good people everywhere. When it's all bases down, you really don't need a fortune. It might be nice to have one, but you don't really need it.’