Heinz Schultz was born in Germany in 1944, but it was in Footscray that his life really began, providing the scene of two lifelong love affairs. 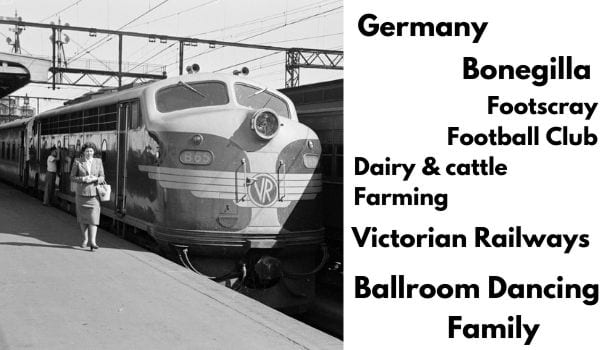 Heinz Schultz was born in Germany in 1944, but it was in Footscray that his life really began, providing the scene of two lifelong love affairs — one with the woman he married and the other with the Bulldogs football team.

In 1954, with work still hard to find in the aftermath of World War II, Heinz’s parents decided they needed to leave Germany to give their seven children a better life. They took up the opportunity of free travel to Australia in exchange for labour of the government’s choosing. Their first stop was Bonegilla, the former army barracks in Albury that had been turned into a migrant reception and training centre for the flood of mainly non-English speaking people fleeing post-war Europe. ‘My dad was a boilerman and kitchen hand.He started at three o’clock in the morning, lighting the boiler ready for people to have breakfast,’ Heinz says. ‘You had a contract for two years and if you didn't meet your contract you had to pay your own fare here and back again.’ The family also spent time at the Maribyrnong Migrant Camp before they were free to make their own lives in Australia, and they promptly bought a house in Footscray. When Heinz was 11, he moved with most of his family to work a mixed farm in the country. Any hope of further schooling was forgotten as he began his working life. ‘I was milking cows and working with the sheep and you were lucky if you got pocket money.’

Working on the railways

Later, Heinz moved back to Footscray to work as first as a labourer, and then as a handyman at Victorian Railways, a job he held for 38 years. ‘I married my wife in 1965 in Footscray. Her name was Margaret Anne. You couldn't get a better woman than her. We met at the ballroom, dancing,’ Heinz says. The couple bought their own home in Footscray and had two children. Whilst he never played footy himself, Heinz developed a love of the game and he’d walk down to Whitton Oval to watch the game every Saturday as a passionate fan of his beloved Footscray.