Fifteen-year-old Guenter was terrified when American troops invaded his hometown of Augsburg at the tail end of World War II. 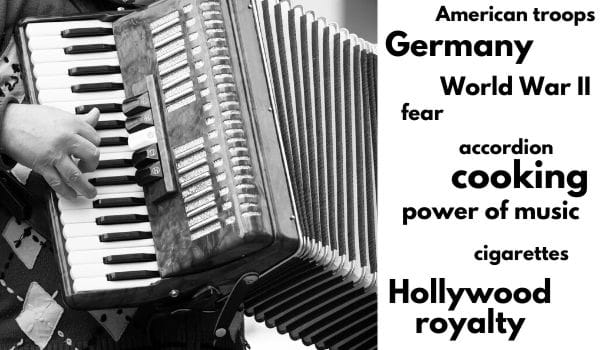 Fifteen-year-old Guenter Eck was terrified when American troops invaded his hometown of Augsburg at the tail end of World War II.

Like all German children, Guenter had been forced to join Hitler Youth so when the Americans knocked on his family’s door, he feared the worst.

‘I thought we were dead. They would be killing us.’

Guenter’s house was near the river, and the Germans had barricaded the bridge during their retreat, forcing the hungry Americans to search the town for fresh food.

Whilst one soldier started cooking, another was looking around the living room and found an accordion under the couch. Guenter had hidden his instrument, fearing the soldiers would confiscate it.

The soldiers made Guenter get up on the kitchen table and play the popular German song Lili Marlene whilst they continued cooking.

‘One come, the other one come, everybody come. They said, “Don't need the gun. Keep the gun away. He's playing music for us”.’

Guenter played for hours. ‘Everybody wants to hear Lili Marlene. I must have played 150 times. I was sick of it.

‘The Americans loved it. They were so nice. They feed me and my mother chips. We never had chips before. He gave me cigarettes. I was not smoking. I was only 15 years old. I was too scared to say, “No, I don't smoke”. After I smoked the cigarettes, I didn't feel so good.’

When the streets finally quietened down at five in the morning, Guenter’s mother ventured downstairs to find the soldiers had gone, leaving a note behind on the kitchen table. ‘It was in English. We couldn't read it so we have to ask somebody who can understand English. It said, “Thanks for the entertainment”. ‘

When my mother went in the bedroom and opened the door she said, “You won't believe it. There is tonnes and tonnes of cans of food. The American soldiers left it there. They never come back so we started eating them. We had three months food. Every can a surprise and three cigarettes.’

The power of music

Guenter says the incident showed the power of music to help form bonds between people who were supposed to be enemies. It also helped cement his desire to become a professional musician. After the war, he began playing in a five-piece band. One night, an American asked Guenter to play the Slow Poke so he could dance.

‘He said his name was Fred and he thanked me for playing it for him. Three months after, I went to a movie, an American movie, and there was that man I was playing for. Fred Astaire.’