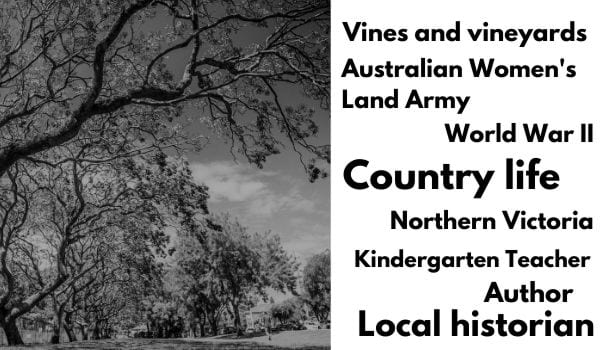 As a local historian and author, 97-year-old Grace Willoughby knows why her retirement home is named Jacaranda Lodge. ‘When the first house was built on this plot of land, they planted a Jacaranda tree and when it became a bush nursing hospital, they gave it the name “Jacaranda” because of the lovely tree in the garden,’ Grace says.

Born on a vineyard

Grace was born in Nyah, on the Murray River, in 1924 at her family’s vineyard. ‘I didn't get to go to high school. I could have gone but it was a lot of cost at the time and, if you know anything about growing things, you are never very well off.’ As soon as she finished primary school, Grace was put to work picking grapes that were sold for dried fruit.

She left the farm for a while to work as a housemaid in town for a few years before joining the Australian Women’s Land Army (AWLA) during World War II. ‘We did men's jobs. Harvesting flax and various vegetables and all sorts of things like that. We all enjoyed all the different places we went to and country life.’ After the war, Grace moved to Melbourne for work. It was there she was then given the opportunity to train as a kindergarten teacher, leading to her first job as a play leader at a country play group in Donald. ‘I thoroughly enjoyed it. It was only a small group, but it got me back to the country.’

After moving back to Nyah, Grace became interested in history and ended up researching and writing two books. Rolling Seas and Sand Hills, which is a history of the Willoughby family, and On this bend of the river, which is a history of the Nyah district. Amongst other interesting nuggets of history, Grace learned her grandfather moved to Nyah from Sydney to take advantage of the land grants offered in the district in 1893. ‘He was able to get a patch of land and cleared it and planted up the grapevines.’