Growing up in East Gippsland on the family farm, Gay trained in Melbourne and then served in the Air Force Nursing Service during the Korean War. 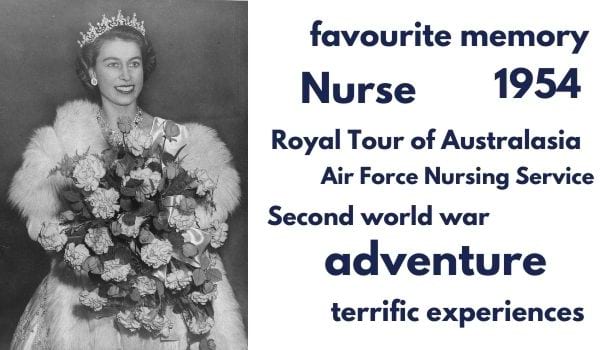 When Queen Elizabeth II undertook her extensive tour of Australia in 1954, Gay Halstead was the hostess chosen to accompany the 27-year-old monarch on the plane trips.
Gay was only a year younger than the Queen during the two-month tour that included 33 flights that crisscrossed the country, clocking up 10,000 air miles.

‘We travelled all over Australia and it was a terrific experience,’ Gay says, recalling the preparation that had gone into ensuring the trip went smoothly and the media attention and public excitement it generated.

Gay grew up valuing her freedom to roam with her brothers on the family farm overlooking the Metung River in East Gippsland. When she was sent to the city to complete high school, she took her sense of adventure and daring with her – sitting on her bike but holding onto the back of the tram to hitch a ride to class.
‘I took my school hat off, of course, and when it stopped I’d let go and look at the birds so nobody noticed me, then I'd attach myself to the tram when it took off.’

She was sent to finishing school at 17 before she trained as a nurse at the Royal Melbourne Hospital. ‘Then I went straight into the Air Force Nursing Service. It was super.’ The second world war had ended by the time Gay joined the services but she was stationed in South Korea during that civil conflict, which is where she met her husband and future father of her two children. The TV show MASH was an accurate depiction of the experience, she says. ‘We even had a Hot Lips.’ Gay says it’s impossible to pick a favourite memory. ‘I'm just happy with what I've had so far and now I'm 92 so I don't have to worry so much about what I say or do. They say, “It's her age,” and that suits me just fine.’