The way Ernie Fonte tells it, he has had more than a few lucky breaks over his 97 years, with the most important one being meeting his wife, Josephine, during a rainstorm when he was 18. 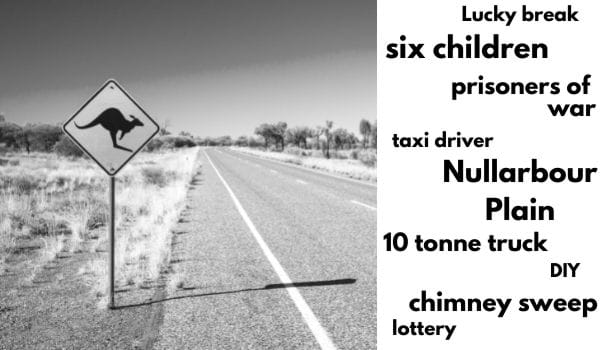 The way Ernie Fonte tells it, he has had more than a few lucky breaks over his 97 years, with the most important one being meeting his wife, Josephine, during a rainstorm when he was 18. They married two years later.

‘She was a lovely girl. She was out of the box, and she was as good as she looked,’ Ernie says.

‘We had six lovely children who are still around. She loved children; you'd think the next child she had was the first one.’

Jobs were plentiful when Ernie left school at 16, and he began working at a macaroni factory. When the war broke out, the army’s love of spaghetti meant Ernie was classified as an essential worker, so it was only later in the war that he was allowed to leave the factory and join up. He was doing his basic training in Cowra, New South Wales, when almost 400 Japanese prisoners of war staged a bloody breakout.

‘They didn’t want to be recaptured and when they were caught, sometimes they jumped on a bayonet. It was terrible,’ Ernie says.

‘They killed a few soldiers. It was pretty bad. I felt crook about it.’

Ernie never saw conflict overseas. ‘I got on the ship but we were turned back - the war was over.’

Ernie began working as a taxi driver. One night he was hailed by the famous American singer Johnnie Ray, who wanted a ride to a party. ‘When I got there, right or wrong, he wanted me to go in with him. I stayed all night and we had a great time. I took him back to his hotel the next day and I saw him a couple of times after that. He was a lovely bloke.’

Ernie then got a job driving for Ford and was asked to drive a 10-tonne truck to Perth from Melbourne. It was the first time it had been done and it took him almost a week to cross the Nullarbor Plain on unmade tracks.

‘It was just a dirt road all the way through. It was better to drive at night because it was so hot during the day and, at night time, it was nice. You could see the sky and everything.’

Given the lack of traffic, Ernie knew he could be in serious trouble when a rock put a hole in his radiator on the return trip. By happy chance, some pitch from a previous cargo had melted in the back of his truck and, reliving the days of his youth when he’d waterproof homemade canoes with the black tar, he spent two days crafting a DIY repair that saw him home.

Ernie was between jobs when he gave a lift to a bloke who offered him a job as a chimney sweep for £4 a day, an excessive sum at a time when £11 a week was a lot of money. Ernie spent a few years sweeping chimneys all around Victoria until Josephine came into money from a sweep of her own —winning the lottery, twice. The family used the winnings to live by the sea in Hampton for a few years before moving back to Inglewood, where they had raised their children.