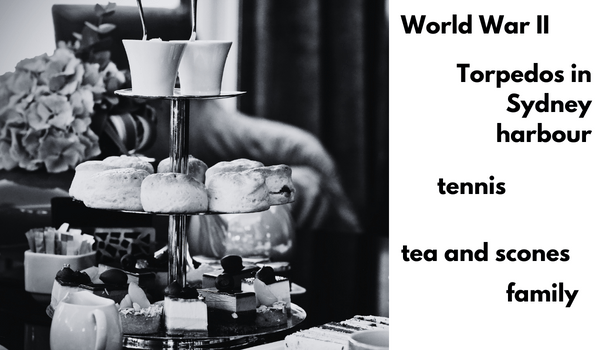 Elaine clearly remembers the night in 1942 when Japanese submarines entered Sydney Harbour, firing torpedoes and sinking a ferry. Only 11 at the time, Elaine and her family sheltered under a table in the middle room of their home, which had been converted into a makeshift bomb shelter. Their house was only five miles from the Sydney GPO, so they were close to the action.

'It was terrifying. The booming and everything else. We didn't know what was going on and I don't know if dad could get it on the radio. Probably not that night. For instance, we didn't know about the Darwin bombing; at the time it wasn't in the Sydney papers or anything like that. They didn't want people getting paranoid about it.'

Elaine has a series of photographs of her older cousins in uniform who stayed with her family before being sent overseas to serve in World War II. Some, like her 20-year-old cousin Brian, never to return.
'That was a tragedy. Dad had a big family in South Australia, and they all seemed to depart for overseas service from Sydney. They would come and see us and so I got to know them briefly like that.'

Elaine was born in 1931. The daughter of a bank manager, her political views were shaped early, when Ben Chifley's Labor government proposed nationalising the country's banks, which could have led to her father losing his job.
'My whole life was rocked. I thought, "My God, what's going to happen?".'

As a result, Elaine became an active member of the Young Liberals when she was 17.
'We had lovely meetings, always at someone’s home. It was more of a social thing. There were about 20 of us and it was a lot of fun.'

After the war, her parents bought a large block of land and built a big home with a tennis court where her friends and the Young Libs frequently gathered.
'Mum was always ducking out with cups of tea and scones.'

At one meeting Elaine’s eye was drawn to a 'tall, shy boy standing in the corner, smoking a pipe.'

Only three years older than Elaine, Ian seemed sophisticated to the 18-year-old, but it was the pipe that was the sealer. 'It's amazing, isn't it? Fancy thinking a pipe was elegant!'

Elaine got engaged to Ian on her 20th birthday and they married a year later.
'I hadn't had any other boyfriends really. I just fell in love with him.'

Ian was a buyer for Coles and declared ‘No wife of mine has to work,’ so Elaine resigned from her job but was bored after six weeks and got a part-time position where she could walk to work. It was there she ‘forced’ herself to take up smoking in protest at the injustice of the 'smoko' at her workplace.

'They'd go and lean on the balcony, and they'd smoke away, and there's little me sitting with the typewriter and other men coming along and dumping things on my desk all the time for copying and whatnot, because I was the one that was always there.'

Soon, the couple had their first daughter, then Ian got a transfer to Melbourne, where they eventually bought a home and made a life for themselves in Brighton.
'We had a wonderful 64-year marriage. He was a lovely man. I was very fortunate.'