Married at 18 to a dashing service man, Eileen later found her dream career as a Special Needs teacher in English schools. She migrated to Australia in her 60’s to be near her grandchildren 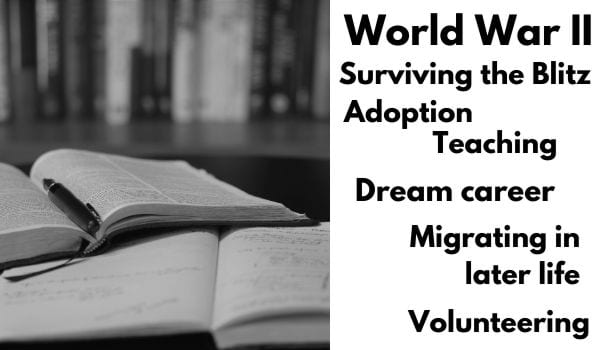 Like more than a million English children, Eileen Banyard was evacuated to the country during the second world war, but her rural stay was brief. ‘My mum and dad came to see me, and I was in rather a horrific little cottage and I was scratching and itching and they could see things running in my head and, they just said, “Pack your bag, you’re coming home with us,” and they just dragged me out the door.

‘Then I spent the war years in East London during the Blitz, and we all survived,’ says Eileen, now 90. ‘I wanted to try teacher training but, in those days, you couldn't do it very easily, so I went into banking.’ Eileen was 18 when she met a dashing young service man through a friend. ‘He was nine years older, but we had an absolutely wonderful marriage.’ The couple had two daughters then added an ‘optional extra’ when a school friend of their girls lost her adoptive mum. The family took her in and raised her as their own. ‘She always calls herself the optional extra,’ Eileen says. ‘Years ago, we did try to adopt her to give her the security but there was all this legal business that we couldn't adopt an adopted child.’

The girls were grown up when Eileen read an article that would lead to her finally realising her dream career. The article was about a 15-year-old girl who wanted to learn how read so she could get her driver’s license. Eileen not only volunteered to teach the girl but approached the Education Office to learn how it was possible for a child to reach that age without learning basic literacy. ‘They suggested I go to university to become a Special Needs teacher.’ Eileen took them up on the idea and enjoyed her second career, helping children who were struggling at school.

After her husband died, Eileen came to Australia to live near one of her daughters, who had two young children at that time. ‘I'm a newer Australian. I didn't get out here until 1996, so just 20 years. ‘When I first came, there was an advert again for somebody to help children and I used to go to a school where the kids needed to do some extra work and things, on a purely voluntary basis. ‘I just live my life and help people where I can.’