Don has had a life-long love of boating, fishing and yachts. The eighty-two year old has competed in a number of the iconic Sydney to Hobart competitions over the years, and never forgets the 1984 race that saw him washed overboard twice. 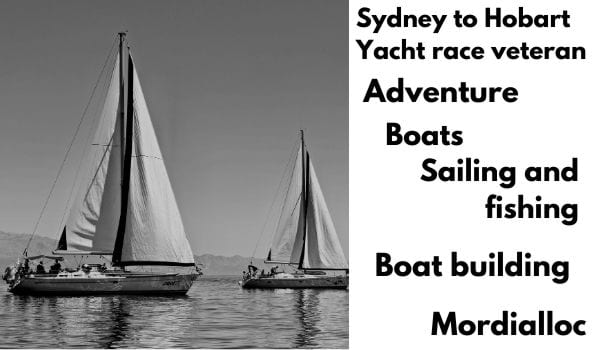 Boats, and particularly yachts, have been a life-long passion for Don Shields. The eighty-two year old has competed in a number of the iconic Sydney to Hobart competitions over the years, but it’s the 1984 race that sticks in his mind.

Adventure on the high seas

‘That was very adventurous. There were five of us in the crew and just a 31 footer yacht. There was a really big storm...We got blown off course. The sea was humongous because it was wind against tide and, when that happens, the waves just stand straight up vertically.

‘I got washed overboard twice when it was really blowing hard. It was my turn to go out to the tiller to steer and the boat was standing up on its end vertically and tipped me straight out. I went out the back of the boat and then the next wave came up and threw me straight back on again. I was very, very lucky.’

The crew managed to get back on course and came second in the small boat class.

‘We were glad to have a hot shower and a decent meal. We hadn't eaten for about three days.’

Don has loved boating, fishing and particularly yacht racing since he was young, and turned his passion into a career – owning his own boat building business in Mordialloc. Despite his close shaves over the years, he has never feared for his life when things haven’t gone to plan.

‘If you start thinking like that, you’d never go out on the water,’ he says.

A successful blind date at a rock n roll night

Don’s other passion has been his wife, Margaret, who he met on a blind date at a rock and roll night in Aspendale when he was 22. The couple married two years later and have two daughters.

All in all, Don is pretty happy with the way his life has turned out.

‘If you love your work, that’s half the battle. If I could, I’d have gone to work seven days a week. I used to look forward to it. I never made a great deal of money, but I think we're happy with what we got.’