Dawn’s life story does not make for easy reading but, instead of dwelling on the bad, she is determined to use her life experiences to help children dealing with family violence. 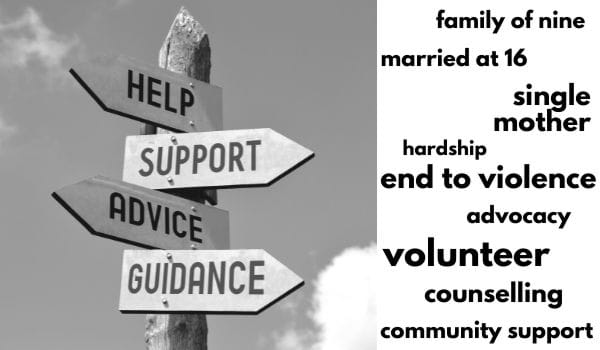 Dawn Clark’s life story does not make for easy reading but, instead of dwelling on the bad, she is determined to use her life experiences to help children dealing with family violence.

Dawn grew up in St Albans as the oldest daughter in a family of nine.

‘I was made to leave school at 13 so that I could care for my younger brothers and my mother could go back to work,’ Dawn says. ‘I think they were struggling to keep the mortgage up on the house.’

Dawn was only 16 when she became a bride.

‘I had my first child when I’d just turned 17. My husband was an alcoholic and a criminal and he was always in and out of jail. He was very abusive, but my mother was one of these people that said, “You made your bed and you'll need to lie in it”. So I did for about seven years, but that was the end of that.’

As a single mum, with three children at that stage, Dawn had to work several jobs to make ends meet.

‘I cleaned a kindergarten a couple of nights a week and I'd work a day job and then I'd work an afternoon job in the factory.’

She remarried and had another child but her second husband died of a massive heart attack at the age of 42.

For a time, Dawn and her children lived in a squat in Bulleen.

‘I had gone through the hard yards with landlords saying, “No, I’m not leasing a house to you because you've got kids,” and it didn't matter how much I was earning or whatever. It was, “No, not interested. Don't bother to apply”.’

Dawn began working as an Advocacy Officer for the Tenants Union (now Tenants Victoria) and supported John Cain’s push to give renters more rights, helping to set up the Residential Tenancies Tribunal (now the Victorian Civil and Administrative Tribunal).

Dawn was then appointed as Victoria’s first female county court bailiff, a role she held for four years. After a stint in real estate and working her way up to become the National Marketing Manager at John Sands stationary company, Dawn ran a floristry shop until a long standing back injury forced her to sell up and move in with her aging aunt. She now lives in a unit, owned by social housing provider Wintringham, and volunteers with organisations that help survivors of family violence and advocate for an end to gender-based violence, including the Multicultural Awareness Community Empowerment group (MACE), Aboriginal organisation Djirra and Women’s Health West.

‘Quite often people who have English as a second language don't quite understand what's going on and they're terrified to go to court so they need somebody not necessarily to tell them what to do, but just to sit there with them and be there with them,’ she says.

Dawn is also studying counselling at university with the aim of helping children who have experienced family violence.

Her advice to others experiencing hardship is upbeat: ‘It's no good sitting in a corner and getting into a foetal position. You've got to get out there and start doing things. Get up every day and be happy to be alive and smile.’