If Cynthia Cooknell’s mother had her way, Cynthia would have waited another couple of years before marrying Herbert ‘Nobby’ Cooknall and had a church wedding witnessed by her extended family. 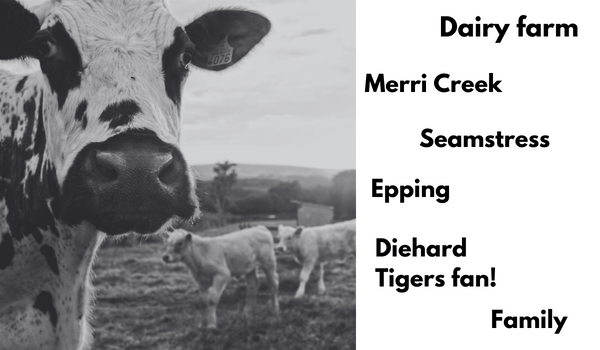 If Cynthia Cooknell’s mother had her way, Cynthia would have waited another couple of years before marrying Herbert ‘Nobby’ Cooknall and had a church wedding witnessed by her extended family. But, having met Nobby at 16, Cynthia at 19 was sick of waiting.

‘I said, “Well, I'm getting married or I'm going to live with him”, and you couldn't do that, so I got married, but I didn't have a wedding as such because my mother would have to invite all our old aunties and uncles - she'd be inviting them, but I'd be paying for it. So, I had my two older sisters and mum, and he had his mother and a sister, and we got married at the registry office.’

Nobby’s parents had a dairy farm beside the Merri Creek in Preston and the couple moved to the farm and took over the local milk run. Their first child, a boy, was born nine months later.

‘That's what happened in those days, if you didn't know anything. My mother had five girls and she never told 'em anything. You don't talk like that.’

Cynthia gave being a seamstress away and helped with the milk run. Holden had just brought out a ute and Nobby bought one, so they were able to bring baby Colin with them.

Long before baby capsules and safety standards, baby Colin (now a dairy farmer) would be tucked up on a curved ledge on the back of the seats.

‘You know, he never woke either until I put him to bed and, funnily enough, that's when he'd wake up. We delivered the milk and then we'd go home and have about an hour or so sleep, you know, and then get up and milk cows.’

Five years on, the couple, had added a daughter to their family and had saved enough for a deposit for their own dairy farm in Epping. Despite it being hard work, Cynthia loved farm life. She’d been born in Benalla, as the seventh of eight children, and enjoyed her early years in the country before her family moved to Richmond at the start of the war.

Cynthia grew up in a house close to the MCG, so she remains a diehard Tigers fan with a poster of the team decorating the wall of her room.

‘My brother Tommy played for the seconds. We lived right across the road, and you could hear the crowd roar.’ Cynthia left school at 13, ‘I couldn't get away quick enough!’ she laughs.

She pretended she was 14 so she could work at Coles, but her mother insisted she train as a seamstress.

Cynthia was crossing Princes Bridge in the city, when she met Nobby.

‘A girlfriend and I walked into town and these chaps come along on motorbikes and mounted the curb in front of us,’ she says. ‘We didn’t know them but, in those days, they did that sort of thing.’

Cynthia’s girlfriend quickly agreed to go for a ride, but Cynthia took some convincing. ‘I said, “If you go fast, I’ll smack your face”, so we went down to Luna Park and had a nice time.’

The couple were happily married for 53 years. ‘He was just sensible. I thought he was mature. I was 16, he was 20 but I mean they never grow up really - I don't think so,’ she laughs.