Corry worked for the Australian Defence Force in the Northern Territory, experiencing floods and crocodiles. She and her husband Neil also fostered 57 children. 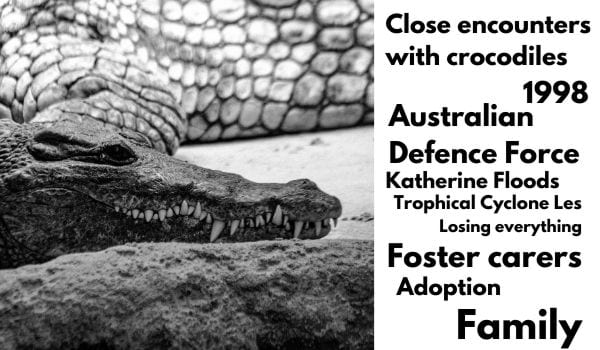 Corry Ogden is an expert in recovery from natural disasters, both as a psychologist who worked in communications for the Australian Defence Force (ADF) and as a survivor of the devasting 1998 floods in Katherine, in the Northern Territory.

Corry, now 64, and her late husband Neil were working in the Territory for the ADF when Tropical Cyclone Les dumped 220.8mm of rainfall on the Top End town within 24 hours. ‘We lost everything,’ Corry says. ‘We couldn’t see our nine foot cyclone fence, it was well underwater. ‘When we look back at it now, it's quite hilarious. We got into a boat and when we got to dry land, somebody ran up to me and said, “Corry, how does it feel to be nearly attacked by a four-and-a-half metre crocodile?”.’ The local paper had taken a photo of Corry as she was getting into the boat, with a huge croc lurking close behind.

Not long after, Corry had another close call with a crocodile when the couple were driving during a tropical storm. Neil said, “Darling, can you get out of the car and move that log?” The windscreen wipers were going a hundred miles a minute, and I got to the front of the car and discovered the log was not a log and it was moving. And quick. I got my second foot back in the car just in time.’ Neil was Corry's second husband. ‘I got married very young. I was 17. I had a stillborn son just before my marriage, then I had my first daughter, who is 46 now, then I had a daughter in 1986 who died at three months of age from cot death, and then I had my son, who's now 43.’ Corry and her first husband coped with the loss of their two babies by fostering children. When that marriage ended, and Corry married Neil, they continued to foster children as well as adopting three brothers. ‘It’s hard to say how many we fostered but once I counted and it was about 57 — some we only had for six weeks or a couple of weeks.’