Despite a diving accident that left him paralysed at age 15, Colin Davies reckons he’s had angels looking out for him his whole life. 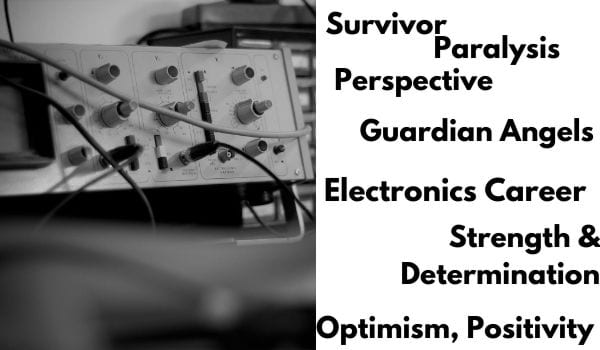 Despite a diving accident that left him paralysed at age 15, Colin Davies reckons he’s had angels looking out for him his whole life. Colin was born in 1944 and had his sights firmly set on being a farmer until the accident that saw him spend his sixteenth year in the new spinal unit of the Austin Hospital.

‘I guess the most important survival technique in my case was to just not get upset about things that you've got no control over. If you can't change it, don't fuss.’ Colin’s parent’s lived at Stawell, a four-hour drive away but their visits were made easier when they met Horrie, the first of Colin’s angels. ‘He lived just up in Heidelberg with a very large backyard and he said, “Why don't you bring a tent down and camp in our back yard on the weekends you come down, so you don't have to pay exorbitant motel fees?”.’ Horrie had three daughters who would also visit Colin, which is how he met his future wife, Pam.

Colin had been discharged home as a ‘invalid pensioner’ when a woman from the Red Cross knocked on the door with the news the charity had organised for him to study at RMIT in Melbourne. ‘It made my life. It was the turning point for everything and, to this day, I do not know where, how or why they got involved,’ Colin says. Colin lived at the Austin’s rehab unit and would take a taxi to campus where his cousin’s husband, who taught there, would help him get to class.

A couple of months after Colin graduated, a ‘wonderful human being’ asked the Austin if they knew of a past patient who may be interested in an electronics job. ‘So, all of a sudden, the work came to me and not only was it work, but it was work that even now I cannot believe. I would have paid them to play with the toys that I was now being expected to assemble repair, calibrate and fix. So, I spent the next 20 something years playing around with scientific instruments. ‘On top of that has been a wife of 44 years at last count, two delightful daughters, two grandsons and one incredibly beautiful granddaughter…and none of that would've happened had I sat on my bum and waited for the next cheque.’