During World War II Claire worked with the State Electricity Commission, before marrying a Scotsman she met at an old-time dance, and moving to the country. 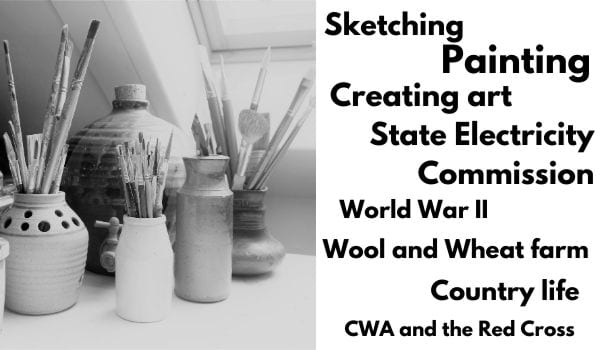 At 96, Claire McKenry continues to enjoy her lifelong love of sketching and painting and her years of dedication to her art are apparent in her beautiful creations. ‘I had two cousins who were artists and they told me to keep trying and keep drawing. So, I just kept drawing. It's a lovely interest. It doesn't matter whether they are hanging in galleries or not, you just enjoy doing them,’ Claire says.

Working at the SEC in WWII

Claire was born in Sydney but did most of her schooling outside of Geelong. It was at Geelong Technical College that she learned the shorthand and typing skills that landed her a coveted job with the State Electricity Commission, where she worked during World War II.

Claire met her husband at an old-time dance. ‘His name was Douglas. John Douglas McKenry — very Scottish. He played the bagpipes, and now my sons play.’ Douglas’s family had a wool and wheat farm, near Horsham, and the couple moved there after they wed and raised three sons. Although she was never a fan of milking cows and had always thought of herself as a city girl, Claire took to country life. ‘I looked after the kids and did a sketch if I had a minute. ‘We lived on the banks of a lake and I could row the boat out if I had an hour to spare, drop a line in and catch a redfin.’

Claire joined the Country Women’s Association and the Red Cross and says she fitted in well, with one small exception. ‘I cooked dinners, but I couldn’t make those fancy pavlovas. The other country girls were good cooks — but I could draw.’