It was when working under cars as a schoolboy at his dad’s motor body repair business, that young Brian Robertson realised he had to do well at school so he could forge a different life. 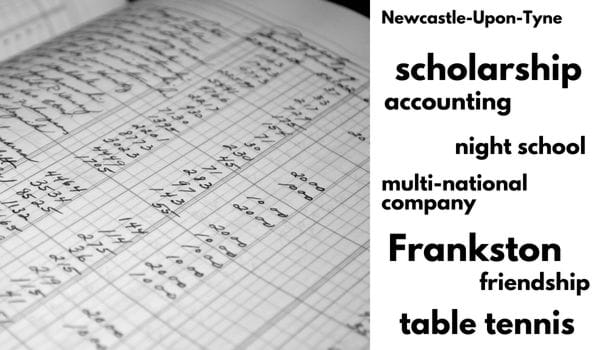 It was when working under cars as a schoolboy at his dad’s motor body repair business, covered in rust, that young Brian Robertson realised he had to do well at school so he could forge a different life.

Brian was born in 1937, in a working-class area of Newcastle-Upon-Tyne in the UK. The home of ship building, coal mining and a munitions factory, Newcastle was heavily bombed during World War II and Brian frequently had to run to the air raid shelter in the backyard as a kid.

In winter, Brian and his mates found another use for the air raid shelter in the middle of the next street; piling snow up against the back wall.

‘One of the lads had a big, heavy sledge and a few of us could get on. We’d sledge down the street, use the shelter as a ramp and go straight over the top, land in the snow and down to the bottom of the street. Occasionally we'd go a bit too far. We'd cross the road and hit the door of the cobbler’s shop with the sledge — and run like the devil.’

Brian studied hard, winning a scholarship to the secondary commercial school, which led to another pivotal moment; when a salesman convinced his mum that all the scholarship kids needed encyclopedias.

‘It was a con but, because she didn't know any different, she committed to buying things that she couldn't afford. That stimulated me into thinking, “Well the least I can do is work hard at school”.’

His hard work paid off and he qualified for a Civil Service job. But when an issue with his hearing prevented him from moving into the area he wanted to work, he applied for job in Production Planning in Birmingham. The company requested he attend an interview – they would pay for the train and accommodation.

Brian got the job and continued studying accountancy at night school. The days were long, the nights lonely and his cooking terrible so he rang his fiancé, Dorothy, who he’d met through his Youth Club in Newcastle, and suggested they speed up their wedding plans. Dorothy agreed but they soon needed to move back to Newcastle when they were expecting their first child as his weekly wage of £12 couldn’t sustain a family.

Brian then landed his first of several jobs as an accountant and continued his studies to become fully qualified. A promotion to Company Secretary followed. Unfortunately, Dorothy’s first pregnancy ended with the baby being stillborn, but the couple went on to have two healthy daughters.

Brian was working for a multi-national company when he was again offered a paid trip — only this time a two-year posting to Australia. The young family moved to Frankston and soon formed a tight knit group of friends.

Dorothy was terribly homesick for Australia when they returned to the UK so, when the Managing Director of the Australian company asked if Brian could come back, they jumped at the chance to return permanently.

The couple have travelled extensively and now live in a retirement village, where Brian has put his skills with a spreadsheet to good use; organising golf trips and table tennis competitions for his fellow residents. He and Dorothy came away from the 2019 Australian Masters Games with seven gold and one silver medal between them.

Brian is proud of what he has achieved in his life, but also thinks he’s been in the right place at the right time.

‘Lots of people work hard in their lives and don't get a little bit of luck,’ he says.

His life lesson is simple: ‘Work hard, be honest, keep a sense of humour and pick the right wife or husband. I reckon I did, and I think she did as well,’ he laughs.

‘We’ve had so many good times and the fact that we're both playing sport together, like table tennis, and we’re both pretty decent players — even at our age — I think that's great.’

Listen to the Robertsons' story