A wireless operator during World War II, Bill married Berry within months of being demobbed, and the couple moved to Australia in 1956. 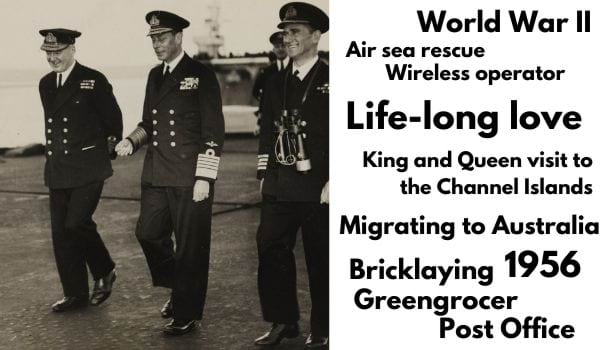 When British World War II airman Bill Shephardson knocked on the door of the home that was to serve as his billet in the port town of Newhaven, it was the woman who would become the love of his life who answered the door. Bill, born in 1922, married Betty within months of being demobbed, and the couple remain inseparable. ‘Betty and I are still in love with each other at this age. I think she's the best girl in the world. Yeah. That's how I feel. You see other couples who hardly speak to each other, but not Betty and I.’

Bill was a wireless operator during WWII. ‘My best years in the war were the three years I was on Air Sea Rescue at Newhaven, in which time we saved 365 lives and brought back almost the same number of deceased people for burial. So, I really feel I did something that was worth doing. Rather than killing people, I was saving people.’

Bill was involved in the King and Queen’s visit to the Channel Islands of Jersey and Guernsey when they were being handed back to the UK by the Germans, after being occupied for most of the war. ‘I spent time with people who had been occupied and they told us the hardships they'd gone through — mostly lack of food. Actually, they told us there was only one cat left on the island. One lady had her cat on a lead, but all the rest had been cooked and eaten because they were so short of food.’

After the war, Bill became a bricklayer and the young couple decided to migrate to Australia in 1956. ‘With the war in Britain, it was just in a terrible state. There was no money. It was completely bankrupt. There was 80 million buildings and houses destroyed by bombing and there was still full wartime rationing in 1956,’ Bill says.

Once settled, the couple brought out Betty’s parents and younger sister. Bill set up a building business with a friend, who he worked in partnership with for 24 years, whilst Betty brought up their three sons as well as working at a greengrocer and post office over the years. ‘Coming to Australia was the biggest highlight for me, because we had such a rotten time during the war,’ Betty says.