Bev Coutts was on a ship in Queensland when word came through that they were going to be hit by the tail end of a cyclone and it was going to be rough. 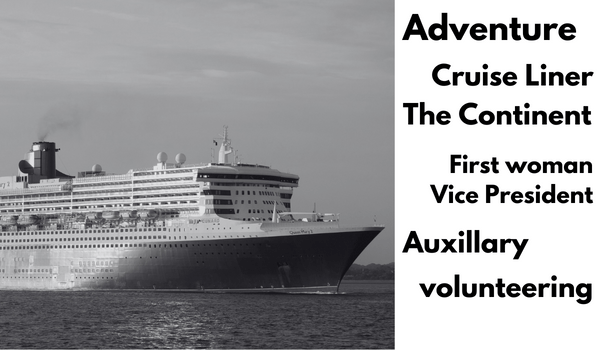 Bev Coutts was on a ship in Queensland when word came through that they were going to be hit by the tail end of a cyclone and it was going to be rough.

Whilst her mum was lying flat on her back in a cabin, Bev and her sister didn’t turn a hair on the trip, which their dad had planned as a training trip in preparation for a six-month adventure — travelling by cruise liner to Europe to see The Continent.
'Dad always wanted to travel. Mum wasn't as sure. Thank God she said she wouldn't go without my sister and I, so we said, "Yes, thank you very much".'

It was an incredible adventure for a farming family from Kyneton in 1955. Bev was 21 and had returned to work the farm after finishing boarding school in Melbourne, her sister was three years younger.

'It was wonderful. I have had two overseas trips with my husband since and the difference in the travel; I mean, 27 hours later, you are over overseas! It took us four weeks to go over on the Orsova and five weeks to come back on the Orion.'

Bev’s husband David was also from a pioneering farming family. They became friends through the Young Farmers. 'I think I was the first woman vice president in the district,' Bev says.

The couple combined their inherited acreage and Bev was keen to provide their three children with the same carefree childhood she’d had enjoyed.
'We really were lucky. My grandparents were just across the river from us and, apart from mother giving dire warnings about snakes and drowning et cetera, we could roam around.'

However, the Malmsbury Youth Justice Centre opened nearby in 1965, casting a shadow over their lives after her children witnessed two detainees escaping through their property.

The detective who interviewed Bev’s six-year-old daughter told her, 'One is in for murder, and the other has convictions as long as your arm.'

Bev was heavily involved in the community, having leadership roles, including at auxiliaries such as the Maternal Child Health Centre, as well as the high school mothers club and in the church community. When David literally died with his boots on, at her feet in the kitchen one morning, she did not slow down.

'I didn't sit there moaning and groaning. I had a great life.'

Bev took up bowls and began travelling around Australia with a girlfriend whose family owned a bus line. 'We were lucky - it was reasonably cheap compared to today's prices and yet we always had good three-star motels and good bus lines.'

Bev was President of Kyneton Probus, which also organised trips away to places including New Zealand, Norfolk Island and Uluru.

For the past seven years, Bev has loved being a resident of RM Begg Kyneton Aged Care.

'I get very enraged at some of the terrible things they say about nursing homes. I know they're not all like this place. I'm not dumb. But I'd like to see a lot of credit given to places like this and the kind community who support us so wonderfully.'

Bev is still a member of the facility’s auxiliary.