Betty survived serious illness as a child, and cancer as an adult, and married her third husband Rick - in her late seventies after bonding over her famous fruitcake 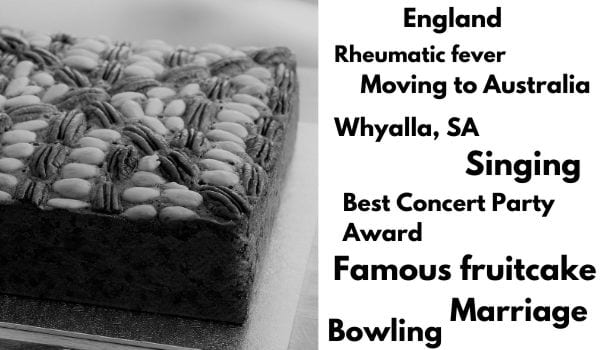 Betty Norman, 92, has survived serious illness as a child and cancer as an adult and is now enjoying life at an aged care facility in Mornington where she is the resident representative on the interviewing panel for new care staff.

Betty was born in England where she took longer than most to finish her schooling, having to make up for the six weeks she lost due to illness. ‘In those days, you were frightened to not be at school because the School Board man would come and knock on the door and want to know what was matter. So, when I got wet on the way to school, I still went, and I caught a chill that resulted in rheumatic fever. ‘It was serious. They had to have the bed down in the lounge and mum had to wait on me hand and foot.’

Betty met her first husband when working as a wages clerk. They married when she was 20 and she had her first son when she was 21. ‘I divorced my first husband and, fouryears later, I met my second husband.’ The couple emigrating to Australia with their two young children after answering an advertisement for a boiler maker job, with a house, at Whyalla in South Australia.

‘I had two brothers here in Australia who spoke so well of it that we got tempted. I'm glad we did.’ When the Whyalla shipyards closed in 1978, the family moved to Melbourne. Betty was diagnosed with a brain tumor and the treatment left her deaf in one ear. Unwilling to let that dampen her love of singing, Betty teamed up with another woman to form a 21-strong concert party to put on variety performances. ‘We were together for eight years and we won the best concert party in the Senior Citizens Week of Victoria for those eight years. It was quite an achievement. I've got a picture of one of the awards.’

In her late 70s, Betty divorced her second husband and was living in Frankston when her famous fruitcake recipe led her to her third, and happiest, marriage. An ex-Navy cook called Rick joined Betty’s bowling team and sampled the cake she had brought to share with her teammates. ‘He said it was the best fruitcake, he'd ever tasted — I didn't believe him — but it sort of went from there. We got married eventually. Two old rascals.’ Betty is now a valued resident at Andrew Kerr and is looking forward to getting ‘the letter’ for her 100th birthday in eight years’ time. ‘If I can stay here, I'm going to be fine.’