Brian and Beryl have just celebrated their 60th wedding anniversary, at the heart of a family of 3 children, 8 grandchildren and 3 great-grandchildren. 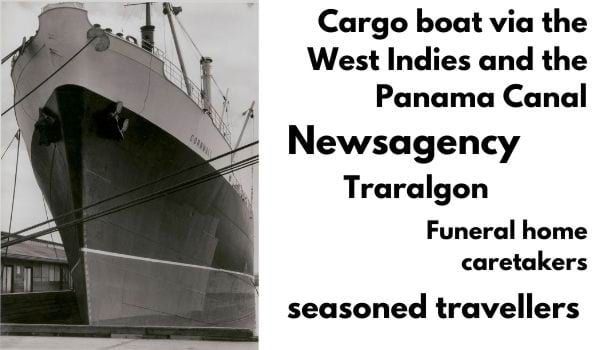 Born in London in 1936, at 20, Brian Watts was already a seasoned traveller when he started asking out the cute girl who sold him his paper each morning at the Traralgon newsagency.

Brian’s family had travelled to Australia by cargo boat via the West Indies and the Panama Canal. ‘It was amazing waking up in Sydney Harbor,’ Brian says. ‘We had to anchor there overnight, and we were woken up by the lions roaring at Tooronga Zoo. It was a great adventure and, as far as I was concerned, Australia was home as soon as I stepped off the boat.’ However, his parents did not settle into their adopted country quite so easily. ‘I think we had 13 moves in the first three years we were in Australia.’ His family finally settled in Traralgon, where Beryl had been born in 1941. Straight out of high school, Beryl got a job at the newsagency a few doors from where Brian was working. ‘Every time Brian asked me out I'd say, “No”. Then he rang my mother, and she was the one that said “Yes”. I got mad at her because I'd said “No” for months, but a woman I worked with said he was very nice and here we are, 65 years later.

We've just celebrated our 60th anniversary and we are still happy.’ Once their three children were grown, the couple made the move from Traralgon to Melbourne after they successfully applied, on a whim, to be caretakers at a funeral home. They now have eight grandchildren and three great grandchildren. ‘Our family have all grown up as good citizens. They are all happy together, they are all honest, they are all hardworking, none of them have gone off the rails so, for us, that’s probably the best achievement we can look back on, because somewhere down the track we must have done something right,’ Brian says.

Their tip for a long and happy relationship? ‘I think treating each other as our best friend and talking things out. It was a partnership. It still is,’ Beryl says.