Barbara is a great example of her generation’s commitment to volunteer community work – she was a dynamic contributor over many decades. 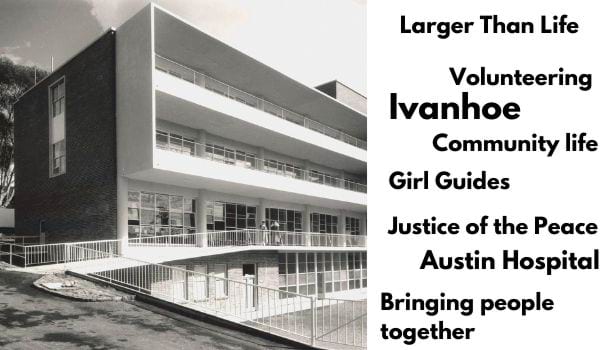 Barb Temby was born in 1929, which she says makes her about 150. Whilst the maths is rubbery, she’s certainly done more in her 91 years than most people could achieve in a century and a half.

"Frail and confused Elderly" (not Barb!)

Up until her early 80s, Barb was still zipping around Ivanhoe in her Rover, sunroof down, dropping in on people as a volunteer with the ‘Frail and Confused Elderly’ visitation program she had set up during her nine-year stint as a Heidelberg Councillor. ‘I put an ad in the paper about it and the town clerk said to me, “You cannot put that in the paper!” Well, we had so many frail and confused people turn up that we had to open the Town Hall, so that was really exciting, and it was very successful,’ Barb says. The advertisement included Barb’s home number, which was not unusual. Barb has devoted much of her energies to making life a bit better for residents of her beloved Ivanhoe, which included frequently throwing her house open to the public. ‘Ivanhoe was quite a small area in those days, so I wanted to help people mix,’ she says. Unsurprisingly, Ivanhoe was where Barb met her husband, John. ‘We enjoyed our time together. It was nice to meet someone — the right one — and he gave me four children. I’ve been very lucky.’

Whilst Barb stopped paid work when she married in 1951, her volunteer work ramped up. In addition to her time on council, for more than 40 years Barb sat on 30-plus boards, including the Austin Hospital and was involved with countless groups including her local church and Girl Guides. She was appointed to the position of volunteer Bail Justice, responsible for out of hours bail hearings, and was a Justice of the Peace. With her father, who was also a serial contributor, Barb helped start the Ryder-Cheshire Ivanhoe Home to provide low-cost accommodation for people who had come to Melbourne for hospital treatment, and Dowell Court, an aged care home that is now part of Benatas. Barb was heavily involved with the Spastic Society and a sheltered workshop in Heidelberg. She would also visit Mont Park psychiatric hospital to chat with patients. ‘A lot of people there had no personal contact with anyone and they had a lot of worries they wanted to talk over with someone.’