As a young nurse on her first overnight shift at the Royal Children’s Hospital during an outbreak of pneumonia in the 1940s, Barbara had to comfort grieving mothers as well as tend to sick children. 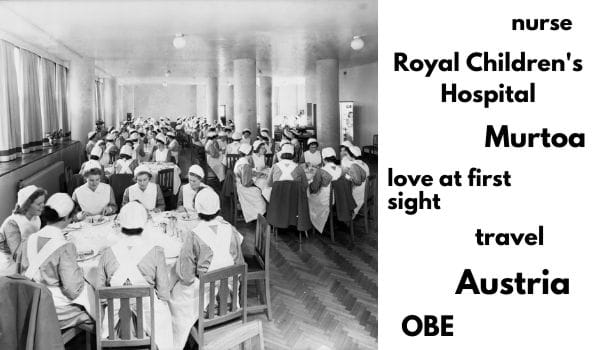 Centenarian Barbara Date can sympathise with nursing and medical staff who are overwhelmed by COVID-19 cases. As a young nurse on her first overnight shift at the Royal Children’s Hospital during an outbreak of pneumonia in the 1940s, Barbara had to comfort grieving mothers as well as tend to sick children.

‘There were no blood transfusion or intravenous treatment back then. The only thing they had were these (antibacterial) M&B tablets and they made the babies sick very often. It was terrible really. The first night I was on, five babies died and the mothers of course were terribly distraught and you had to deal with that as well. So, it was pretty hard really.’

Barbara also nursed children recovering from polio at the Frankston Orthopaedic hospital. ‘A lot of them were paralysed, they couldn't walk. They tried to rehabilitate them as well as they could.’

Despite its challenges, Barbara loved being a nurse, a career she feels she was destined to take up; following in the footsteps of her four aunties.

Barbara was born in 1921 in the Victorian country town of Murtoa as the youngest of her parent’s two children. The family moved to the Melbourne suburb of Surrey Hills when Barbara was five and she applied to be a nurse after completing her high school education at Camberwell Grammar.

The training was tough – Barbara had to work upwards of 50 hours a week and live onsite under the eagle eye of tough matrons, but it had its upsides. It was because Barbara was living at the Royal Children’s Hospital’s nurses’ quarters that she was introduced to her future husband, Richard, at a party.

‘He was asked to take me back to the hospital because he lived at Essendon and I lived in at the children's hospital, so that's how I met him. It was love at first sight. The best moment of my life was meeting my husband. I really mean that.’

Richard and Barbara had three children and travelled extensively during their 50-plus years together. ‘I’ve seen most of the world.’

Barbara’s favourite holiday was a trip to Austria. ‘My daughter lived in Austria at the time and we went right up to the very, very tipity top there and saw the Midnight Sun. The country is very, very green and there are lovely little cottages on the side of the hills.’

After Richard’s death, Barbara continued to enjoy travelling with a close girlfriend who had also been widowed, visiting countries including Scotland.

Reflecting on her life, Barbara recalls the great excitement she felt when her father learned he was to receive an Order of the British Empire (OBE) for his work as an engineer. Her parents travelled to England for the ceremony at Buckingham Palace where the Queen presented Barbara’s father with his OBE.

‘After he received that, my mother and father were invited to all of the garden parties and the balls that were held when the Queen was out here. So, I'm very proud of him.’