It’s hard to believe Anna Svalbe was born in 1919. The 102-year-old has more energy than most people half her age, bubbling with enthusiasm and creativity. 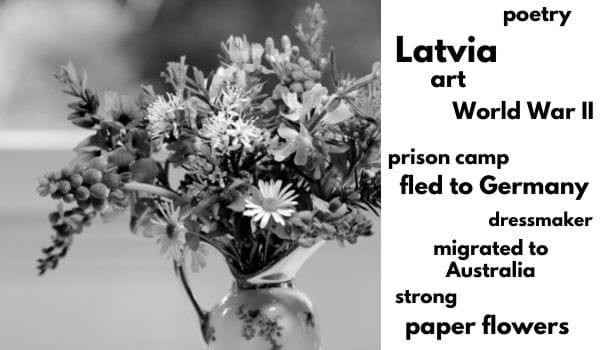 It’s hard to believe Anna Svalbe was born in 1919. The 102-year-old has more energy than most people half her age, bubbling with enthusiasm about her poetry, art, music, bingo, daily exercise classes and holding the record in her aged care facility as the only hookey player to score 50 on a single turn (five times).

Anna was born in Latvia. Her mother died when she was only one year old and when her father remarried, Anna was plunged into a Cinderella-style scenario where she was expected to do farm work whilst her father’s new wife doted on her stepsister.

‘I was helping to bringing the wood from the bush in winter. It was very hard. I was a little girl and how I am still alive, I wonder. It made me tough,’ Anna says.

After learning dressmaking, Anna moved to the city to live with her aunt. It was there, at the age of 22, that she met the man who would become her husband.

During World War II, Russia’s Red Army invaded Latvia, then the Nazis took over and forcibly conscripted Anna’s husband into the German army.

When the Red Army retook Latvia, Anna fled to Germany in the hope of being reunited with her husband, but it was three years before she saw him again.

‘After the war, the soldiers were put in a prison camp in Belgium. When I met my husband, he was swollen from hunger and like a stranger, and it was very hard to help him be strong again.’

The couple stayed in Germany for a few years before leaping at the chance to migrate to Australia, despite knowing little about it and only speaking limited English.

‘I was very happy to run away from the Russian Communists. It was very hard. We had a little one-year-old) boy and we had nothing, but I thank the God we got out and we were living somewhere very nice and safe,’ Anna says.

After 10 years in country Victoria, the couple moved to Melbourne where Anna continued to work as a dressmaker whilst her husband worked on the railways and built their home in Mount Waverley.

‘I was very happy,’ Anna says. ‘I do painting and I like art. I was always doing things and singing and working for charity and organisations. I would still like to do the painting but now I can't see anymore. My vision is very bad. That's my biggest problem.’

To make the most use of her limited sight, Anna has turned her skills to making incredibly life-like flowers from tissue paper and coloured paper. She cuts the leaves under a magnifying screen and glues the pieces together by feel.

Anna also uses the magnifying glass to read non-fiction, devouring more than 250 books on her favourite topics of medicine, history and religion since moving into her aged care facility in 2010. She has also written three books of poetry in Latvian.

‘I thank the God that I am so strong, that I can do so much,’ Anna says.