Andrew was born in Malta in 1934 and migrated to Australia with his wife and two children in the 1960s. 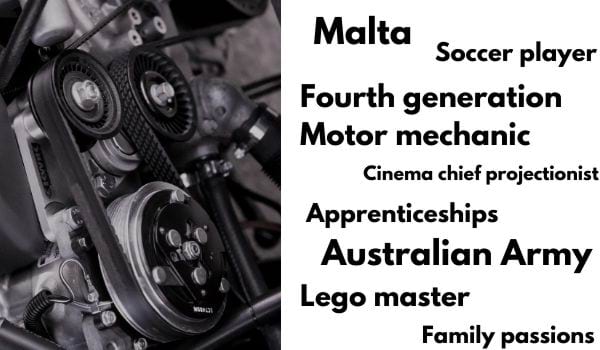 In a garage in Point Lonsdale, a young boy is learning about car engines from his dad, continuing a fourth-generation legacy started by his great grandad, Andrew Bondin.

Growing up in Malta

Andrew was born in Malta in 1934. As boy, he was a talented soccer player. ‘I loved it. We used to play Italy and, from nine games against them, we won one,’ he laughs. ‘When I finished school, I was 16 or 17 and I started an engineering apprenticeship with Ford, but when I finished from the apprenticeship, I went working with Chrysler as a motor mechanic. ‘Over there you had a couple of jobs going. I used to work as a motor mechanic by day and then, at night, I’d go to the cinema and I was the chief projectionist.’

Andrew married his wife, the aptly named Mercedes, when he was 21. ‘Her brother was married to my sister, then I meet Mercedes and, of course, we got married.’ Their boys were five and six years old when the couple decided to follow Andrew’s siblings to Australia. He soon landed a civilian role in the Australian Army’s Engine Reconditioning unit, training apprentices and maintaining the engines of the army vehicles, a position he held until he retired at the age of 55.

Whilst working with vehicles as a job, he also enjoyed tinkering with cars at home, passing on his love of engines to his sons, who are both motor mechanics, and his great grandchildren who have also shown an interest. Now living in Arcare Point Lonsdale, Andrew’s talented hands have turned to creating complex Lego sculptures, including a combi van, a pirate ship and a replica of Manchester United’s football stadium. ‘I don't like watching TV and sitting down to have a sleep or something. I like my hands working and my mind is always busy.’