Amy and her family experienced the 1983 Ash Wednesday fires in Macedon and became very involved in the annual Red Cross fundraising appeal as a result of that. 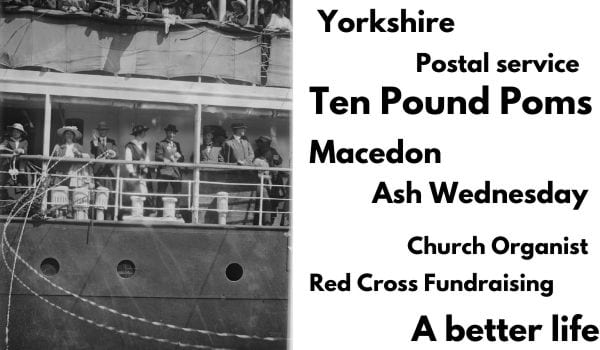 Sixty years on, Amy Hall still can’t believe her family’s luck in getting a spacious cabin onboard a ship for only £10 when migrating to Australia from the UK. ‘It was a real holiday. We had three meals a day. We had a big cabin to ourselves. We were nearly on top deck and had a four-berth cabin. It was very nice.’

Growing up in Britian

Amy was born in Yorkshire in 1918, and left school to take a job at her village post office. She worked there for the next 15 years, meeting her husband Vernon at a dance in the village. As a farm worker, Vernon was exempt fighting in World War II. Amy, who stands at ‘three foot something’ was also exempt from military service. ‘I have friends who went to war and some joined the ATS [the women’s branch of the British Army]. I was called up, but I wasn't tall enough.’

Amy and Vernon decided to migrate after hearing positive reports from family members who had already made the move. ‘We came to Australia to get a better life. The boys were 10 and eight when we came and they did well here.’ The couple made Macedon home and were evacuated to Gisborne when the Ash Wednesday fires swept through the region in 1983. The fires claimed seven lives and destroyed 628 buildings in the Mt Macedon and East Trentham area alone, adding to the fire’s overall death toll of 75. Amy and Vernon spent the night with other evacuees in a village hall. There were no beds, so they sat up all night, waiting for the fire to pass. Their eldest son lost his house and, whilst theirs was saved, the fires had a lasting impact.

‘I played the organ at the church in Macedon for 25 years until it was destroyed by the fires. They got a new one, but I couldn't reach the pedals.’ After the fires, Amy became heavily involved in the annual national Red Cross fundraiser. ‘We had to go to Melbourne to be presented with a medal.’