Alma will be able to check in on how her family has been doing in early 2021 at her postponed 100th birthday celebration, with 68 family members slated to attend, including multiple great-great-grandchildren. 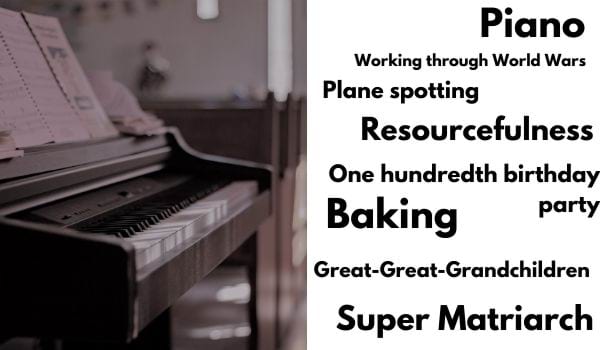 Alma Sloper taught herself how to play the piano and played the organ for her local church for 25 years. Now 100 years old, Alma still plays for her fellow residents at Willaura Health Care aged care facility.

Alma grew up on sheep farm and left school at 14 to work as a house cleaner for six years until World War II broke out and the exodus of men caused a major labour shortage. Alma then moved to Kyabram to work in the cooperative fruit cannery. ‘I had to cut the peaches and the pears, ready for the cannery,’ Alma says. She also volunteered as a ‘spotter’, noting the movements of planes in the area. ‘I had a chart to fill in what planes I saw flying over — where they were going and what type of plane at what time. It was to catch any enemy planes that were sneaking over,’ Alma says. Although she didn’t spot any enemy planes, the Air Force awarded Alma a certificate in recognition of her efforts.

It was at the cannery that Alma met Clarence Sloper, one of the few men who had remained behind to do the heavier work. Clarrie romanced Alma during the war and married her when it ended in 1945. The couple had eight children, which led Alma to develop her superpower; according to her children, Alma was capable of feeding lots of people out of an empty fridge. Alma is still making shortbread and, late in life, has shown some artistic talent with several of her watercolours included in a virtual exhibition this year. While Alma doesn’t claim to know the secret for a long and happy life, she has never smoked, drunk alcohol or driven a car, preferring to walk.

Her highlight over the past 100 years? ‘When the kids were all grown up and getting married and seeing them all doing alright.’ Alma will be able to check in on how her family has been doing in early 2021 at her postponed 100th birthday celebration, with 68 family members slated to attend, including multiple great-great-grandchildren.