With a life-long passion for aviation and a knack for absorbing information, Alan relishes the opportunity to share his knowledge with others. 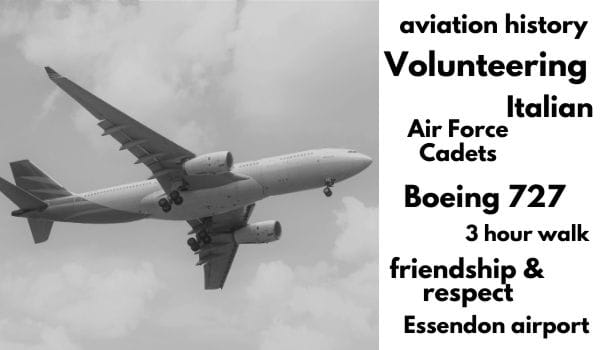 Alan Whatman has always been a sponge for knowledge.

‘When I was two, we had a fish and chip shop around the corner, run by Italians,’ Alan says. ‘I used to walk around there every lunchtime and I’d come back speaking Italian and my mum would have to get one of them to interpret for her.’

That knack for absorbing information meant that when Alan joined the Air Force Cadets at 14, the officer in charge often had to defer to him on technical points relating to aircraft.

‘I joined the Air Force Cadets and our boss was an Ansett check captain. He was giving us a lecture one night on how the engine on the Boeing 727 worked and I put my hand up and said, “That's wrong, sir”. And he said to me, “Beg your pardon?”.’

‘I said, “That is wrong. It doesn't work that way”, and so he yanked me out to the front of the class and said, “Show me where it's wrong”. And I did.

‘He said, “You said you know too much for your bloody good” and, from that moment on, him and I had a great rapport, we really did.’

A love of aviation

Alan’s life-long love of aviation was sparked by his dad, an engineer for the now defunct Trans Australian Airline (TAA). As a child, Alan would accompany his dad to work at Essendon Airport, and soon learned all he could about the different airplanes.

‘When I was 16, a DC9 had just arrived from America that had no seats in it, and I helped put them in for two and a half hours,’ Alan says.

Once he even helped identify and solve an issue with the landing gear of a plane that had the engineers stumped.

‘I spent most of my weekends at the airport just hanging around. If I didn't have enough money for the train and train fare from Broadmeadows to get there, I walked to Essendon Airport. It took me three hours or so and I’d walk home again sometimes, and I never thought anything of it.’

Alan, now 70, had a varied career, working in different fields including as a tube inspector at Olympic Tyres, now Beaurepaires, but his love of aviation endured. He taught aeroplane recognition to Australian Air Force Cadets up until five years ago and has notched up two decades as a volunteer at the TAA Museum at Airport West where he is able to draw on his extensive knowledge and experience of Australia’s aviation history.

Alan married three times and has five daughters. His third wife was his youngest brother’s mother-in-law. You might want to read that again…

‘So, I became my brother's father-in-law. My stepdaughter is my sister-in-law. He had two kids, my nephew and niece, who are also my grandkids. It gets very confusing — even to me.’

Alan is most proud of the strong friendships he has maintained over the years, including with people he first met more than 50 years ago as a cadet. His advice for younger people is simple: ‘Treat everybody with respect and it’s amazing how it comes back to you.’